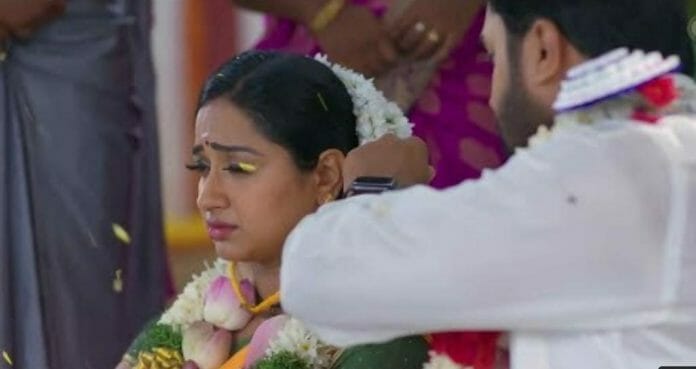 Maari is newly launched show of ” Zee Tamil”. Maari has the innate ability to see the future and foresee impending dangers. Now serial focusing on Surya refuses to accept Maari

In the previous episode we saw; Thara talked with Shakunthala over phone. Devi appeared there and disconnect the connection there. Shakunthala tried to stop the wedding there. Sreeja provoked Shakunthala against Maari.

Surya said to Shakunthala that she don’t have any rights to stop his wedding. He said clearly to her that he promised to his dad he will marry Maari.

Shakunthala felt humiliated and walked away in angry. Devayani lashes out at Sreeja for tried to ruin her sister life. Devi felt happy seeing her son tied knot with Maari.

Kishore and Devayani felt happy to see her daughter gonna lead a happy life. Meanwhile Police followed Thara’s car. He stopped her car she scared to the core seeing police. He advised her to close the door and left.

In the upcoming episode viewers will see; Surya will announces to all that he fulfilled dad’s promise to marry Maari. He will add that he can’t accept Maari as his wife. He don’t like her and have no interest in this marriage.

Kishor will question Jagdish about it. Jagdish will advise Surya to accept her but he deny it. Devayani will plead to him but he leave from there. Later Kishore will regret for his decision. Maari will console him.