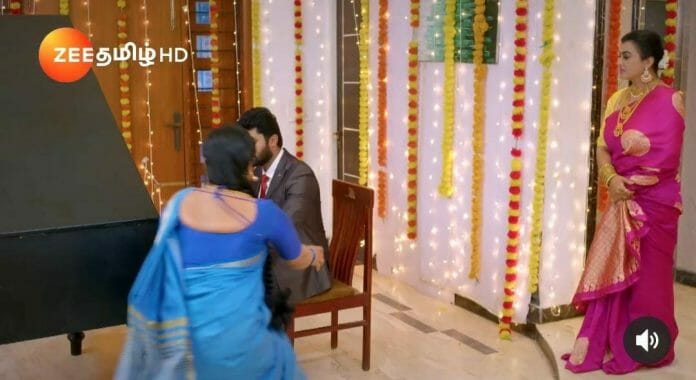 Maari is newly launched show of ” Zee Tamil”. Maari has the innate ability to see the future and foresee impending dangers. Now series focuses on Maari to save Surya

In the previous episode we saw; Surya asked Maari to say what’s on her mind. He assured to stop this wedding arrangements. Maari asked him to marry a girl who match to him. Later, Aravindh loose the screw of Chandler. His uncle find out Aravindh planning to kill Surya in the function.

Later, Vickraman asked the doctor to give a detailed report of the poison given to Surya. He reveal something to him. A strange person kept a close watch on Vickram. Later, Vickraman learnt that Devi didn’t died in an accident but found poision from her body. Vickraman felt that someone spying him.

In the upcoming episode viewers will see; Thara will bring three girls to home. They will sit in front of Jagdish in a disrespectful way. Thara will demand Maari to give coffee to everyone. She will introduce Maari as a servant. Sreeja will enjoy the scene.

Maari will get a vision of Surya ended up in danger. Maari will save Surya on time. Glass pieces hurts Maari’s leg. Surya will call the doctor and ask her to save his wife. Girls will leave from there after learning the truth.