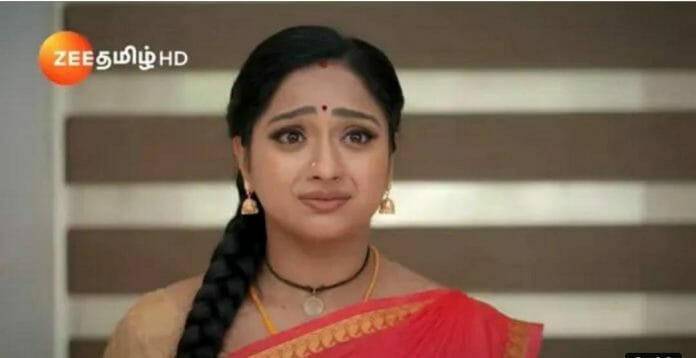 Maari is newly launched show of ” Zee Tamil”. Maari has the innate ability to see the future and foresee impending dangers. Now series focuses on Priya to take Maari’s help

Hasini’s brother visited her house and surprised to see Maari there. He revealed to them that she saved him danger. Hasini requested him to find out the culprit. Later, Satish blocked Priya’s way. He was troubling her. She warned him to complain about him in the police station.

Police arrested him for troubling her. He escaped from the police. At night he sneaked into her room and showed her showering video to her. He threatened her to give 10 lakhs to him.

In the upcoming episode viewers will see; Sreeja will suggest Priya to sell Maari’s jewels. Maari will assure her to help her and get money from Surya. Sreeja will notice it. Sujatha will notice Devi’s Jewellery missing.

Sreeja will come out wearing the jewellery. Sujatha will rebuke Sreeja for wearing Devi’s Jewellery. She will tell her that only Maari has the rights to wear it. Thara will demand her to don’t remove it. Priest will ask Maari and Sreeja to lighten the diyas. Devi will decide who should wear it. Sreeja’s diyas will blow off in breeze.

Will Maari go to Surya’s house?