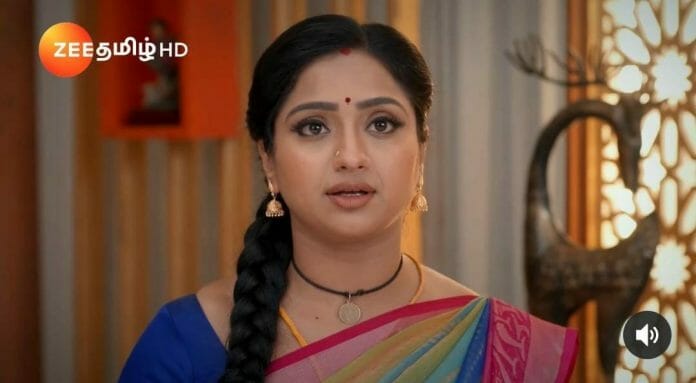 Maari is newly launched show of ” Zee Tamil”. Maari has the innate ability to see the future and foresee impending dangers. Now series focuses on Thara searches for a new match for Surya

In the previous episode we saw; Family members got surprised to see Surya’s change. Priest visited Surya’s house. Jagdish asked him to check both Surya and Maari’s horoscope. Priest shared with them that Surya will marry once again. Thara determined to search a new match for Surya. Priest assured Jagdish that Maari will win at the end. God will bless her.

Later, Vasuki confronted Surya open up to Vasuki about his feelings for Maari. He cleared to her that he don’t hate Maari. She had a kind heart. He was treated her as his friend. He wasn’t able to consider her as his life partner. Maari overheard this.

In the upcoming episode viewers will see; Surya will dream like Thara get cardiac arrest due to stress. He will think a way to solve the issue. Maari will request him to remarry. She will stay in this house as a servant and protect him.

Surya will deny it. Later, Thara will demand Surya to share his opinion. Maari will announce to her that Surya will remarry. Sujatha will notice Devi’s Jewellery missing. Sreeja will come out wearing the jewellery.

Sujatha will rebuke Sreeja for wearing Devi’s Jewellery. She will tell her that only Maari has the rights to wear it. Thara will demand her to don’t remove it. Priest will ask Maari and Sreeja to lighten the diyas. Devi will decide who should wear it. Sreeja’s diyas will blow off in breeze.

What will happen next? Will Maari go to Surya’s house?