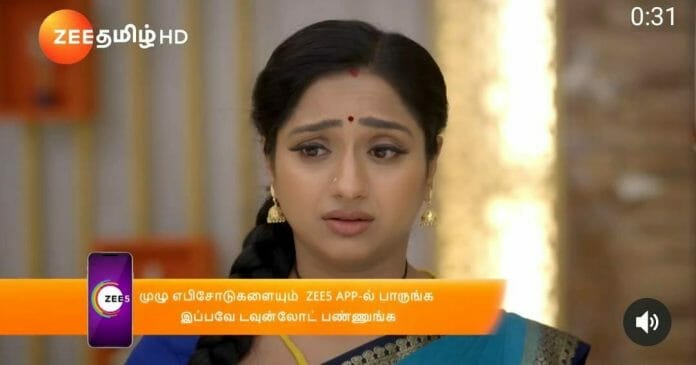 Maari is newly launched show of ” Zee Tamil”. Maari has the innate ability to see the future and foresee impending dangers. Now series focuses on Thara to support Sreeja

In the previous episode we saw; Surya found the Kalasam risking his life. Devsthanam people decided to check the Surya’s house. Surya returned home with Kalasam on time. Maari thanked him for save the Kalasam. She did pooja to it. Thara got disappointed seeing it.

They returned the Kalasam to Devsthanam people. Little girl got conscious. Mahesh thanked God for saved his daughter. Shankarapaandi doubted how did Surya find out the Kalasam. In temple Priest handover the “muthal Mariyathai” to Maari and Surya behalf of Devi. Later, Thara decided to kick Maari out of the house.

In the upcoming episode viewers will see; Sujatha will notice Devi’s Jewellery missing. Sreeja will come out wearing the jewellery.

Sujatha will rebuke Sreeja for wearing Devi’s Jewellery. She will tell her that only Maari has the rights to wear it. Thara will demand her to don’t remove it. Priest will ask Maari and Sreeja to lighten the diyas. Devi will decide who should wear it. Sreeja’s diyas will blow off in breeze.