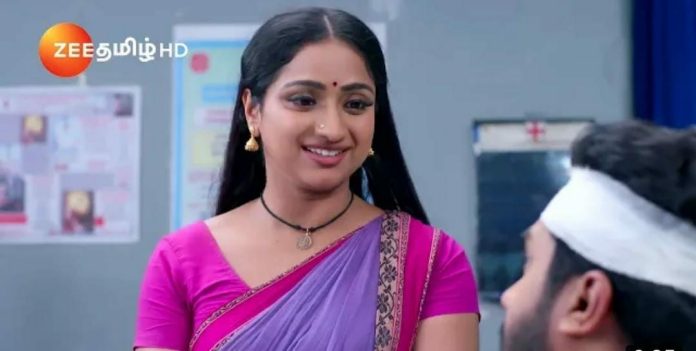 Maari is newly launched show of ” Zee Tamil”. Maari has the innate ability to see the future and foresee impending dangers. Now serial focusing on Surya to save Maari

In the previous episode we saw; Kishore shared to Thevayani Maari was gifted child that’s why she got such rich alliance for her. He add that Jagdish asked him to perform this wedding in two days. Sreeja couldn’t accept the truth Maari gonna live a rich life.

Later Maari noticed drama artist worried about something. She enquired him what’s the matter. He shared to Maari that he arranged Ramayanam drama but Seetha didn’t come to play her role. He requested Maari to help him do the role.

Maari agreed for his sake. Meanwhile Surya got permission from Jagdish to go out . He saw Maari acting on stage. He enjoyed her drama. Maari imagined Surya in Raman’s position. Sreeja came there and set fire on her sari. She shouted for help. Surya saved her from fire.

In the upcoming episode viewers will see; Jagdish will notice Surya packing his things to leave. Jagdish will ask Surya to marry Maari. He will deny it reasoning she is village girl but he studied in abroad she is not a good match to him.

Jagdish will try to explain him his future will be good if he married to her. He will deny it. Jagdish will hold his chest and faint. Surya will admit him in hospital.