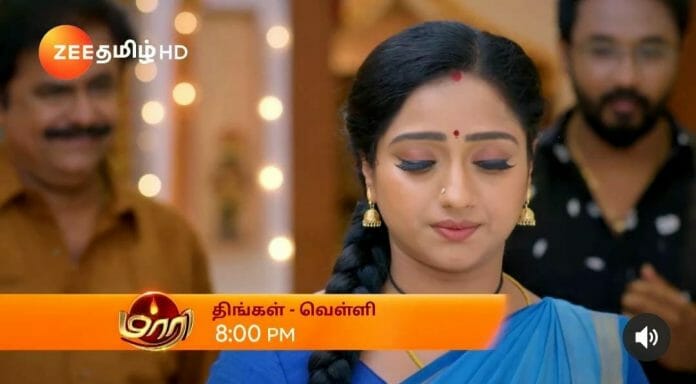 Maari is newly launched show of ” Zee Tamil”. Maari has the innate ability to see the future and foresee impending dangers. Now series focuses on Maari to save Surya

In the previous episode we saw; Thara demanded Maari to welcome the guest. She introduced Maari as a servant in front of them. Maari was hurt to hear it. Hasini inquired the girls about their future expectations? She asked them will they sacrifice their life for Surya or risk their life to save Surya. They denied it.

Thara stopped Hasini from revealing the truth. Aravind demanded Shankarapaandi to send Maari from there. He asked Maari to take gift from the store room. She went to bring the gifts. Sankara paandi closed the door. Maari asked him to open the door.

In the upcoming episode viewers will see; Maari will get a vision of Surya life will be in danger. She will shout for help. Surya will sing a song for the guest. He will signal Hasini to bring Maari there. Hasini will hear Maari’s voice.

She will open the door. Maari will rush to save Surya from the accident. Later, Thara will scold Aravind for planning without discussing with her. Surya will announce Maari as his wife when she was hurt. Surya will inform Thara about his doubt.