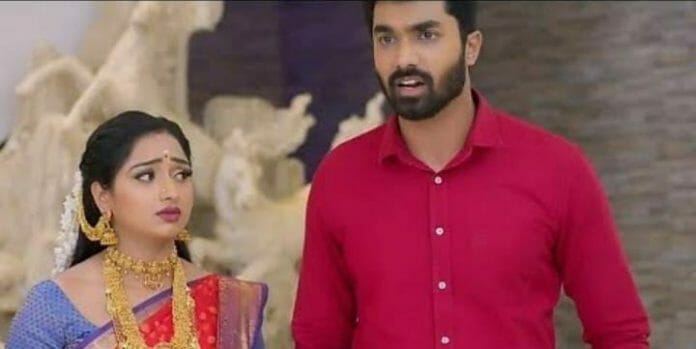 Maari is newly launched show of
” Zee Tamil”. Maari has the innate ability to see the future and foresee impending dangers. Now series focuses on Surya to help Maari

In the previous episode we saw; Maari requested Surya to don’t reveal his second marriage truth with her family members. later, Maari prepared coffee for everyone. Jasmin asked Maari doesn’t she reveal the truth to her family.

Maari asked her to don’t poke her head in her matters. Later, Neelakandan visited Surya house and confronted everyone. Surya lied to him that he won’t marry again. Jasmin relative of Thara. Neelakandan felt relieved after he promised to him. Surya got the phone number from Neelakandan and called to that number.

Jasmin was caught red handed. Surya warned her to stay away from their matters or else he will call off the wedding. Thara scold Jasmin for ruined her plan.

In the upcoming episode viewers will see; Surya will take Maari to bank. He will open a back account for her and deposit money in it. He will be surprised to see his name added behind her name. Later, he will teach Maari to use ATM card.

Later, Mysterious person will spy Janaki and sneak into her house. He will murder her and escaped. Vickram will reach there and fail to caught him. Surya will advice Maari to keep the pass book safer. Aravindh will argue with Thara for not planning anything favour to him.

What will happen next? Will Maari reveal Jasmin’s truth to Surya? How will Maari tackle the situation?