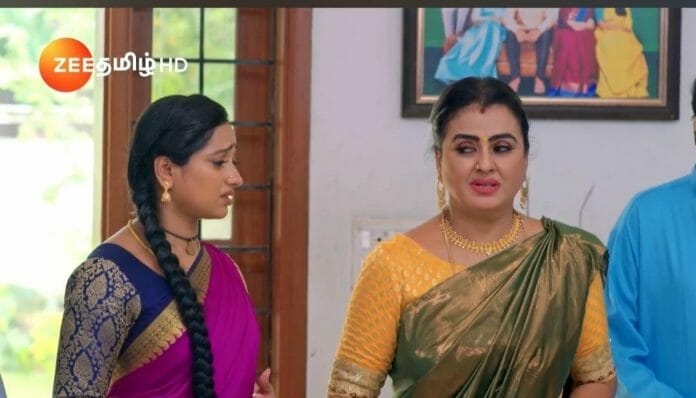 Maari is newly launched show of ” Zee Tamil”. Maari has the innate ability to see the future and foresee impending dangers. Now series focuses on Maari will be in Trouble

In the previous episode we saw; Satish blocked Priya’s way. He was troubling her. She warned him to complain about him in the police station. Police arrested him for troubling her. He escaped from the police. At night he sneaked into her room and showed her showering video to her. He threatened her to give 10 lakhs to him.

Sreeja suggested Priya to sell Maari’s jewels. Maari assured her to help her and get money from Surya. Sreeja noticed it and informed Thara about it. Thara questioned Maari about it. She refused to answer them. Thara accused her as money minded.

Surya demanded them to leave this matter. Jagdish solved the issues there. Later, Sreeja hide the money from the bag and placed papers inside it. Satish tried to attack Priya so Maari beaten him.

In the upcoming episode viewers will see; Sreeja will alert the police. Police will arrest Maari for murdered Satish. Sreeja will inform this matter to her family members. Thara will badmouth on Maari. Surya will learn about it from Priya and rushed to meet Maari in jail. Hasini will request Vickram to help Maari. He will prove Maari’s innocence and take her out in bail.