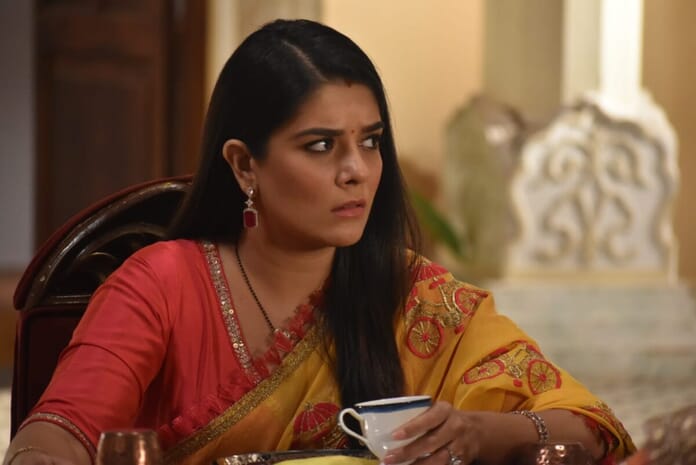 The episode starts with Krishna Pratigya and Garv goes to Kriti’s room and screams happy birthday. Kriti opens her eyes and gets happy seeing them wishing her. Then Garv gives the gifts to Kriti who gets more happy and tells this is her best birthday. She then hugs Pratigya and Krishna and then thanks them. Then Kriti and Garv gets into argument who is their parent’s favorite then Krishna hugs Pratigya and says that Pratigya’s first favorite is him not Garv and Kriti.

Pratigya smiles and signs no to the kids. Kriti goes to show everyone the gifts her parents gave her. Kesar wishes her birthday then promises to gift her in the evening. Kriti goes to Sajjan and Sumitra touches their feet and says that her parents gifted all this but they both ignores her. Kriti gets shocked and asks them donr they not going to wish her. Sumitra mocks and says that she has got so many gifts from her mother then what is the need of their blessings. Krishna and Pratigya comes there.

Krishna tells that he is ashamed to call them as their parents and asks them what even Kriti did they are behaving like this towards a kid. Pratigya asks Krishna to leave it then says to Kriti that she did touched their feet for blessings but if they don’t want to bless her they cant force them so asks Kriti to not to get upset because it’s not her mistake then asks to get ready. Kriti and Garv goes to their room.

Kriti and Garv sees the decoration for the birthday party and gets happy. Meera comes there. Sumitra taunts her asking that she did a drama yesterday that someone tried to molest her then why she is here. Meera tells that she dont want to ruin Kriti’s birthday because of her problems. Sumitra asks her to stop acting. Shakti says to Meera that she lost her child yet she is here to celebrate Kriti’s birthday. Pratigya hears this so she calls Kesar and says they have to arrange everything fast because the guests will be on their way. Kriti and Garv waits for their friends and gets upset when they sees no one is coming.

Krishna tells them not to get upset that they will come but Sumitra asks how come everyone is late at the same time. Krishna asks her to stop playing games for a day. A little guy comes to the house with a gift on his hand. Kriti and Garv gets happy. Kriti thanks him and invites him inside but the kids mother comes there and scolds for coming to this house even after she told that he shouldn’t come here because the people who loves with respect wont come to the house where a man live with two women and takes the kid with him. Everyone gets shocked. Kriti cries and says that her Birthday party gets ruined.

Krishna and Pratigya tries to console her but she refuses to listen to them. Pratigya tells that they all are here to Celebrate her Birthday even they invited everyone but if they refuses to attend with the way they thinks they cant do anything right. Shakti tells Pratigya that because of her only Kriti is suffering like this. Garv says that even for his Birthday party no one will come. Meera apologises to the kids but Kriti asks Meera to leave the house. Then tells her parents to make Meera leave the house then goes to her room crying. Both Krishna and Pratigya sees their kids are sleeping.

Krishna tells that its really hurting to see Kriti is crying that too on her birthday which she expected from last year itself. Pratigya tells Krishna that they cant act like the other family members and make Meera leave the house at the same time they have to make the kids understand the situation also they have to tell them truth and asks Krishna to help her. Krishna says to Pratigya that if he says something the kids will understand something else so it’s her who needs to guide him. Pratigya tells both of them together will make the kids understand everything that’s happening.

In the morning Sumitra tries to learn English. Shakti comes there and asks Sumitra why she looks happy. Sumitra says that Pratigya is not here she has taken Krishna and the kids outing because Kriti’s birthday party got ruined and Kriti is upset. She then says to Shakti that she cant able to help but laugh at Krishna for the way he becomes the puppet of Pratigya. Shakti tells he knows the day Pratigya became a daughter in law of the house he is feeling bad for Krishna. He then says to Sumitra that both Kesar and Meera started giving replies to them instead of obeying their orders it’s all because of Pratigya but he has to teach them a lesson. He then sees Meera ans thinks that he wants to get closer to Meera.

Kesar asks Meera to take rest that she will go to the store room ro take the atta. But Shakti asks Kesar to give him a cup of tea then says Meera to go to the store room and bring atta. Meera says Kesar to tell Shakti that he dont have rights to even say her name then leaves the place. Shakti follows Meera and says that she ruined her life by with Krishna and asks her to give gin a chance and tries to touch her. Meera gets scared and asks Shakti to not to touch her or come near her. Kriti refuses to go to have icecream so Krishna acts and says then have to return the chocolates and all the money will get saved.

Both Garv and Kriti gets worried then Kriti agrees to to the icecream shop to have icecream. Then they all happily enjoys together. When they returns to the house Pratigya searches for Meera, Kesar tells Meera is in the store room and when Pratigya sees Kesar is searching for Shakti she gets shocked and goes to the store room and asks to open the door. Krishna and Sumitra also comes there. Krishna opens the door and everyone gets shocked seeing that Shakti is trying to molest Meera. Meera hugs Pratigya. Shakti gets shocked seeing everyone.

Precap: Krishna beats Shakti and throws him out of the house. Shakti says that Pratigya has to pay for this. Shakti then gives a picture of Kriti to his men and asks to kidnap also make sure that Pratigya and Krishna can’t find.