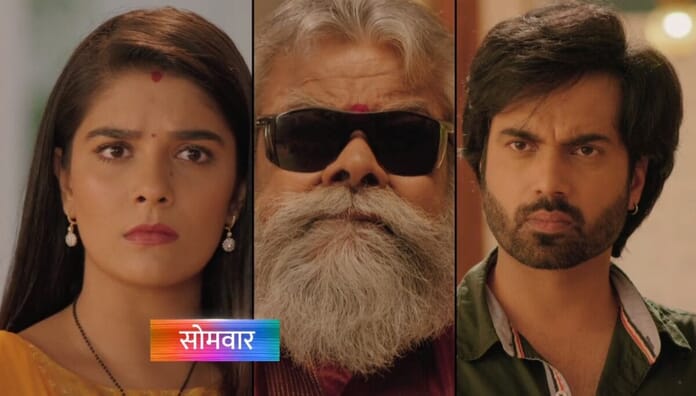 The episode starts with Krishna asks Shakti what is happening here then says to Sumitra that he already told that Shakti’s intentions now he will teach him a lesson. But Pratigya stops Krishna and says whatever the lesson has to teach to Shakti its Meera who will teach him. Pratigya gives a wooden stick to Meera and says that she can’t let this happen to her again and again it’s her who needs to punish Shakti and takes stand for herself. Meera approaches Shakti but he asks her to be calm and listen to his words he loves her a lot. Meera goes and beats Shakti with the stick. Krishna then says to Shakti now he will teach him a lesson and beats him. Shakti asks Krishna to not to make him anger also asks him to listen to his words.

Sumitra stops Krishna from beating Shakti and says that it’s Meera who is wrong, why she is inside the house. Shakti is a man and its normal to touch another women. Krishna gets angry. Pratigya asks Sumitra even being a women why she is not understanding another women’s struggles and pain also she should be ashamed of the way she is thinking. Sumitra says why she should be ashamed of saying the truth then says even kids dont want Meera in the house. Kriti says that’s not true also its Shakti who is wrong not Meera so they have to throw Shakti out of the house. Krishna says to Sumitra now she even heard the kids decisions then beat Shakti and throws him out of the house. Pratigya closes the door. Shakti gets furious and says that Pratigya did a wrong thing by messing with him and insulting him like this so he is going to teach a lesson to Pratigya and leaves the place.

Shakti gives his men Kriti’s picture and tells that he eil kidnap the kid and they have to make sure no one gets to know about the whereabouts. Shakti then says for an outside women Pratigya thrown him out now he want to see what will Pratigya going to do when her own daughter is I’m trouble. Sumitra asks Kesar to go and change her clothes but Kesar says for her her husband is dead because he always wanted another women in his life never respected his wife. Sajjan asks Kesar to die too but Kesar says all this while she is dead now Only she is alive. Sumitra tries to slap Kesar but she stops and warns them then leaves the place.

Pratigya says to Kriti that she is so Proud of her for the way she stand up for what is right and made sure Meera get Justice. Krishna also praises the Garv says their parents are good so they are also good then they all hug as a family. Meera comes there and thanks Kriiti for forgiving her also standing up for her then blesses her. She then says to Pratigya and Krishna she wants to do something in her life, stand up on her own so asks their help to find a job. Krishna and Pratigya agrees to help her. Pratigya says to Kesar that she knows he must be sad because they have thrown Shakti out of the house but Kesar says that she is happy because they did a good job by doing what is right.

Krishna then asks the ladies to come and join with him and the kids to play. They all happily play with each other. In the night Shakti enters the Singh mansion kidnaps Kriti and leaves. The next day Pratigya comes to wake up Garv and Kriti but she couldn’t find Kriti first she thinks that she is getting ready then when she dont find her in the washroom she searches for her the entire house and thinks Kriti will never leave the house without informing her then where she must be now. Krishna Kesar and Meera also searches for Kriti then they all gets worried when they couldn’t find her. Pratigya sees Kriti’s locket out of the house then she says to Krishna that someone must have kidnapped Kriti in the night. Everyone gets shocked.

Precap: Shakti says to the person on the call that they have to come to the place at the time he is asking him to or else they wont get Kriti. Kriti is tied up in a chair trying to untie herself. Kesar says to Sumitra even she knows its Shakti who is behind all this so asks her to call Shakti and bring Kriti to the house. Pratigya says to Krishna that Kesar is thinking that it’s Shakti who is behind Kriti’s kidnapping.