This week Mann Ki Awaaz Pratigya 2 episode starts with Garv gets happy when Krishna showers so much love on him. Krishna Pratigya and the kids looks happy seeing Garv is perfectly alright. Kesar finds the real report of Garv’s so she asks Sumitra how could she do this to Krishna and Pratigya then decides to inform but before that Samar traps Kesar andt tie her in the chair. Sumitra decides to kill Kesar saying this is how she killed Shakti too. Adarsh hurts Komal with his words by saying that the god didn’t give her kids before or else they would have suffered most. Komal cries and tells that Adarsh doesn’t know what it is to lose her kid and the love of her life then when Adarsh apologises to her she asks to have kid but Adarsh refuses saying Komal may become a good mother to her kids but he dont want to have kids with her. Before Sumitra kill Kesar Krishna and Pratigya comes to the house with the kids so Sumitra and Samar locks the room.

Kriti demands gifts from Garv for Rakhi to which Garv asks her to get it from the room in which Kesar is tied. Sumitra tries to stop Kriti but she doesnt listen so Krishna and Adarsh decides to break the lock and then when they all entered the room they gets shocked seeing Kesar. Pratigya helps Kesar. Krishna asks Sumitra to tell the truth but Samar tells its him who did this with Kesar so asks them to send him to the prison. Pratigya questions Samar. Adarsh tells its Sumitra who is using Samar the same way she used Shakti and Meera. Kesar tells everyone that she found the real report. Krishna becomes furious and gives Sumitra twenty four hours to reveal the truth also apologise to Pratigya and Garv or else he threatens to send Sumitra to the prison.

Pratigya tells Krishna that they cant let Samar grow up like his father Shakti so they have to hand over him to the police there he will learn which is right and wrong because after what he idid with Kesar they have to be more cautious. Krishna agrees with her. Kesar comes and pleads both Krishna and Pratigya to give Samar one more chance saying she will change him into a better person so Pratigya and Krishna gives into her request. Samar overhears the conversation then goes to Sumitra’s room. Sumitra asks Samar to support her saying that her next move will change everyone’s life. Adarsh decides to leave Komal but she puts his bags on fire also hits herself in the wall to stop Adarsh from leaving the house. Adarsh gets worried and aids her wound. Komal threatens to send Adarsh to prison again if he tries to leave her.

Krishna decorates the room for Pratigya but the latter losts in her thoughts worried about Sumitra’s nexr move but Krishna calms her down saying he will throw her out if she dont come clean before the time he has given her. They both gets scared and runs to their kids room when they Kriti is screaming. Garv tells the cockroach is not real and laughs at Pratigya and Kriti’s reaction. Sumitra angrily looks at them. The next day Adarsh wakes up Komal and gives her tea rose and saree saying that he didnt realised his mistake now he understands so inorder to take their marriage life to next level ask Komal to get ready for temple after that they can live happily. Komal gets happy. Krishna and Pratigya gets romantic. Krishna reminds Sumitra about the given time then he tells that he is going to recreate everything that has been snatched from him before when Kriti guesse that Krishna is going to tattoo Pratigya’s name again then asks Pratigya to take care of her then leaves. Sumitra thinks that this is the right opportunity to do something to the kids to not to let Krishna meet his kids again.

Sumitra asks Samar to help her but Samar refuses saying Garv and Kriti has nothing to do with Shakti’s death infact its Shakti’s decision to kill Kriti made him to die. He also tells Kesar is the one who stopped Krishna and Pratigya from Sending him to the prison saying that he has goodness in him so he wont do anything that will disappoint himself. Sumitra gets angry at Samar and tells him that she will execute her plan and she don’t want anyone’s help. Samar tells Sumitra that he wont let her do anything wrong to Garv and Kirti so Sumitra locks him inside the room. She then calls Pratigya and tells that Krishna met with an accident. Pratigya gets shocked and goes to see Krishna. Sumitra takes Garv and Kriti with her and locks them inside the dark room in the Singh’s mansion. Samar decides to save Garv and Kriti at any cost from Sumitra.

Komal learns that Adarsh fooled her and left her to live her life without him. She cries. Krishna tells Pratigya that he is completely fine and wonders who gave such wrong information to Pratigya. Samar meets Krishna and Pratigya and informs them about Sumitra’s plan. They both gets shocked and hurries to the house. Sumitra puts the fire outside the darkroom. Krishna and Pratigya saves their kids. Sumitra pushes Samar to run away from there but her saree caught fire. Pratigya saves her from the fire. Sumitra cries. Later Krishna gets to know that Adarsh left Komal first he thinks its Adarsh who betrayed Komal but when Pratigya tells Krishna what all Komal did to Adarsh to agree to marry her. Krishna advices Komal to never do such things in future if she ever meets someone who she likes and asks her to be Strong.

Pratigya thanks Samar for informing her and Krishna about Sumitra’s plan..Samar cries and tells Pratigya that he don’t deserves her thank you also regrets his actions when he was with Sumitra. Pratigya advices Samar to not to repeat the same mistake also asks him to forgive Kesar in the future and hugs him. The next day police arrives at Singh’s mansion to arrest Sumitra. Sumitra asks Komal to take care of her also apologises to Pratigya and Krishna for always trying to find a way to separate them. Pratigya cries. Sumitra then asks the kids to study well like Pratigya then asks them to choose the right path in their life or else they will get punished just like her and leaves. Pratigya advices the kids to choose to do right thing in every situation of their life. Then they all hugs together. 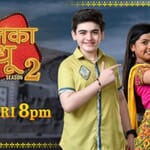