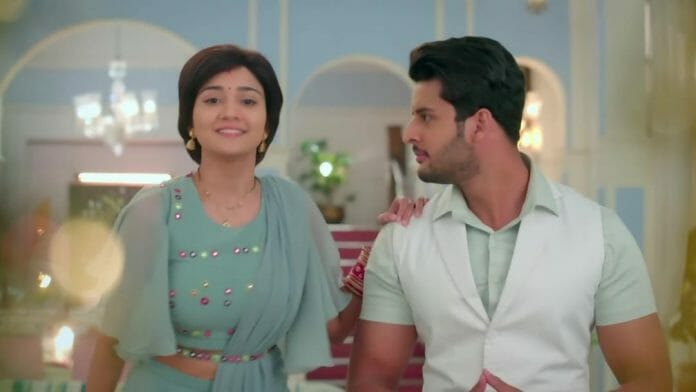 The episode starts with Babita saying they have to save Raj at any cost. They don’t have time. Ram tells Babita that everything will be better but Babita says Raj has limited period of time and then they may lose him forever. Doctor gives them a good news that Manjari has gone to Ambala hospital to bring the heart with the medical professionals. Babita says Manjari reminds her of Meet and they cant thank her enough for the things she is doing for them.

Doctor says but due to union strike it’s quite difficult for the medical team to reach here on time. Meet Ahlawat looks shattered on the other hand, he asks the doctor about Deep’s health. Doctor says he is critical as he lost too much blood. Isha calls Meet Ahlawat and asks him if she hit any person. Meet Ahlawat imagines that he told her the truth that she hit Deep with her car. Isha drops the phone and starts panicking. Meet Ahlawat tells her to listen to him but she slits her wrist, the dream ends.

Meet Ahlawat lies to her that she hit a person named Manish and he is not severely injured but he is undergoing treatment right now. Isha should not worry. Isha feels relaxed. Meet Ahlawat tells Isha to go back home and he cuts the call. He switches off his phone thinking he can’t lie to Isha if she asks him for the second time. Hee sees Deep and wishes for his speedy recovery.

Meet calls the driver to start the ambulance but the driver says he is also a part of union so the members are not letting him drive the ambulance back to Chandigarh. He is bound to obey them else he will end up in trouble. Doctor scolds the driver but Meet takes the ambulance keys from him saying she will drive it. She is about to start but the union members arrive and stop her.

The union head threatens her and takes the keys from her saying she is not allowed to take any ambulance from their hospital. Babita gets worried when the doctor says their medical team is stuck there due to the interference of union members. Babita says if Meet was there, she would have found a way out to come back to Chandigarh hospital. Ram tells Tej to go to Ambala hospital but he says it will take time which they don’t have.

Meet tells the union head that her father in law is serious and they have to take the heart to Chandigarh hospital for his heart transplant. Union head says their rules will not change only for her. Meet diverts his mind and snatches the keys from him. She says she is fearless and confident enough to face them. She adds this ambulance belongs to Chandigarh.

Their strike cant be more important than someone’s life. Noone can stop her from leaving this place with the ambulance. Meet sees only 55 minutes are left and she wishes that Raj will fight for his life and won’t give up. Deep opens his eyes and Meet Ahlawat tells him to get better as he can’t lost him.

Ahlawats pray to Ganpati Bappa for Raj and the doctor says he is having strokes and he will be at risk after 55 minutes. Meet drives the ambulance fast and the ward boy says if they maintain this speed they will reach Chandigarh hospital. Suddenly the ambulance tyre gets punctured. Meet gets stressed thinking how to reach Raj now as she has less than half an hour.

The episode starts with Meet taking Raj to the hospital in ambulance. She prays that nothing should happen to him. Deep stops the car in midway and Isha asks him why did he stop the car here. Deep says this research topic is quite confidential. He will meet her team here and will go to the airport with them. He doesn’t want Isha to get stuck in the traffic so she should go back. Isha asks but where are his team members. Deep says she just became his wife and started doubting him as if he is hiding something. Isha smiles and Deep says he never looked at any other women except her. Isha and Deep hug each other.

Deep says he will miss her a lot in these three months. Isha says she will miss him more. Isha gives him some letters which she wrote for him. She tells him to reply to all those letters everyday after reading one daily. Deep gets happy and Isha kisses on his cheek. He makes her sit in the car and she leaves. He says within three hours he is going to meet her again in the resort in Kasauli. This is the surprise Isha will get.