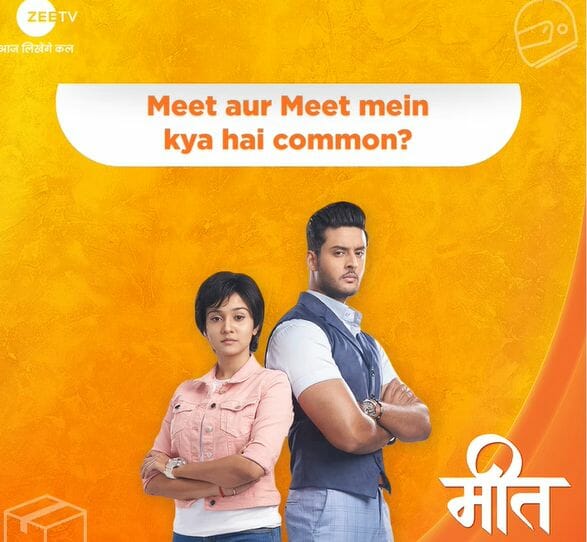 The episode starts police arrests Meet for having drugs in his car without listening to family members pleas. Kunal sees Police gets the drugs packet. Babita feels dizzy, they makes her sit and asks her to drink water. Babita says no, get my Meet. Ragini sees Babita state and asks what happened. Ram tells her Police arrested Meet. Meet listens their conversation. Ram and Raj rushes to police station. Meet tries to come to Babita but Masoom blames her for their problems and sends her from that place. Ragini asks Babita ti have water but she denies saying she dont have anything until Meet gets released.

Police questions Meet Ahlawat who’s their drug leader. Meet tries to tell them that he don’t know how drugs came in her car but inspector won’t believe him. Meet thinks to call Rajvardhan to know why police arrested Meet than she takes her phone and notices audio message of Meet Ahlawat that you know that your sister is cheating me still you hided it from everyone and proof of your mistake is in your hand so place your hand in heart and say that you didn’t cheated me and you’re not my culprit. Meet gets tears and think Meet is correct and I’m his culprit so I have to rectify my mistake.

Rajvardhan comes to station with Lawyer to know about the case. Inspector tells them regarding drug case and they asks him to handle the case in court. Lawyer goes to meet Judge to get the bail. Rajvardhan gets permission of inspector than he goes to Meet. Meet asks Raj about his Mom’s condition. Family members asks Babita to take tablet but she denies saying she won’t have anything until she saw Meet. Masoom calls Hoshiyar and tells him about her Mom’s condition than she sends Duggu to his room with Isha.

Ragini tells to Masoom that it’s tough to get bail as police got the packet from Meet car. Masoom says Mom health may gets deteriorates if Meet won’t return to home. Meet notices their pain and decides to do something. Inspector asks Meet to tell them about their supplier. Meet Ahlwat says I’m innocent so I won’t accept it. Inspector holds his collar. Raj tells them they can’t touch as our lawyer went to get bail. Inspector says you won’t get bail. Meet comes to station and says that packet belongs to her. Inspector asks if she is taking her husband blame. Meet says no, that packet belongs to me so release Meet and arrests me as his Mom’s health is not good. Raj asks why she is doing it. Inspector asks conestable to release Meet Ahlawat and they arrests Meet. Inspector questions Meet about Supplier. Meet tells them she works alone. Meet asks his Dad if he saw Meets real face. Raj asks Meet to leave to home giving his car keys. Meet leaves.

Ragini and Masoom assures to Babita that everything will be fine. Meet calls Masoom and tells them that that police released him and he tells to his Mom that he is coming and he leaves from police station than Babita happily eats the fruits and takes her tablets. Masoom says it’s good that Meet is returning ti home and police entered to our place for the first time and Meet is unlucky for us and I feel her horoscope is wrong and I don’t trust that hooda family. Inspection allows Raj to meets Meet than Raj asks why she did it. Meet sats packet belongs to her. Raj asks what’s in the packet than she wrongly answer him. Raj says you don’t know what’s in that packet than why you take the blame, it’s case of drugs. Ragini says Meet is returning ti home because of the girl you’re blaming as she took blame on herself to save her husband.

Ragini says just now I got to know that Meet takes the blame on herself to release your brother from jail. Raj says you may punished for 10years and why you’re risking yourself by taking blame for family who didn’t accept you completely. Meet says family is family and I accepted your family as mine and his mom needs him. Ragini says we need to thank Meet for saving Meet. Masoom says it might belongs to her otherwise why will she take blame in herself. Sunaina says some people do anything for their family. Masoom says don’t talk about it as it won’t good to listen from you and did you guys remember that Anubha have similar packet to Meet on her Bidaai.

Rajvardhan asks Meet to change her statement. Meet says I can’t as Manushi di created problem for you, so think it as I’m bearing punishment but please help me and make sure that my Mom don’t find about it. Raj gets emotional and insists her to change her statement but she denies than he says he won’t leave until she gets released. Meet says aunt needs you so please leave. Raj says wish My son trusted you but he left believing that drugs packet belongs to you. Inspector asks Raj to leave but he asks for another 2m than inspector throws Raj and Meet Ahlwat holds him on time and says her crime is still not proved so you can’t behave in this way. Raj request him for 2m time. Inspector allows. Raj tells to Meet that he is proud of him amd he goes outside than Meet Ahlwat asks Meet to not sign confession paper’s. Meet says it’s good opportunity to make me leave from your life than why you’re trying to save me. Meet Ahlawat says I can’t let innocent get punishment and I trust you as I trust my dad.

Masoom takes her husband phone and shows to them that Anubha gave similar packet to Meet and she agreed to this crime as she realised that her whole family gets jailed that’s why she is acting like good. Inspector questions Meet regarding packet and Meet says she is confused about bag. Raj calls Cm office and request their help. Meet asks Lawyer to check the cctv footage near restaurant to apply the bail. Inspector points the brought up of Meet than she says don’t point my parents as my dad is respectful officer Ashok hooda and they raised me with values. Police gets stunned knowing it. Raj asks Inspector to attend call of Cm office. Cm office people asks him to release her. Inspector says I may released her even without this call as she is daughter of our mentor Ashok ji daughter and she can do any wrong. Meet thanks them.

Raj tells to Meet Ahlawat that police released their Daughter in law and they leaves to home and everyone feels happy seeing Meet. Raj says Meet is the reason that your son is back to home so what you want to gift your Daughter in law. Masoom asks Isha to take Duggu to his room than she asks Meet to leave from their home. Raj asks what’s she talking. Babita says it’s my decision as we don’t have any place for criminals and she is criminal. Raj tells to them how police released Meet because of her Dad. Babita says he may be respectful inspector but it won’t justify her character and maybe she is using her Dad name to do this drug business. Raj asks Babitha to think what’s she talking. Babita says we saw that her Mom gave that blue cover to her. Masoom says maybe her Mom and Dadi are smugglers. Meet sats stop it as I can’t listen anything against my family and you can see what’s in that blue packet as it’s available in this bag. Meet gives her cover and Masoom gets the Devi maa idol from the cover. Everyone gets shocked.