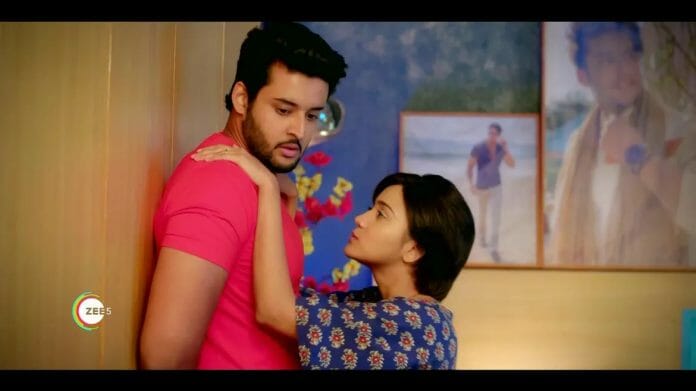 Sarkar calls Meet and says to Meet that she came here to construct the factory right now but it looks like she is going to be build a coffin for Manmeet and leave from here. Meet asks Sarkar what did he do to Manmeet? Sarkar says Manmeet is in the hospital on bed no 11 and says he is on his last breath. Sarkar asks Meet to go and meet Manmeet as she will be able to see before he dies. Meet calls Raj and asks Raj to come to Sarkarpur’s hospital.

Sarkar says to Manmeet now the next part is in his hands and says he believes that he is going to make Meet a slave to their house. Manmeet says when he gives a word he will do everything to keep it.

Meet reaches the hospital. Raj asks Meet how did all this happen? Meet recalls Sarkar’s words. Meet comes to Manmeet and asks him what happened? Manmeet says everything is fine. Shagun throws the engagement ring on Manmeet and says he can take the ring as she did Vrath for a strong man. Shagun asks Manmeet now that he is handicapped how can he take care of her? Meet takes off the blanket and sees that Manmeet doesn’t have a hand. Meet gets shocked seeing this and thinks how could this happen? Shagun blames Meet for Manmeet’s situation. Meet asks Shagun how can she leave someone’s hand like that. Shagun says she is not that great to marry a handicapped person. Shagun asks Meet if she is going to marry Manmeet as this happened because of her. Manmeet signals Shagun to leave. Shagun leaves from there. Meet says to Manmeet that she will file a complaint to the police against Sarkar.

Shagun comes to Sarkar’s mansion. Gunvanthi and Yashoda see that Shagun is upset and asks her what happened? After talking to her they understand she is jealous seeing Meet and Manmeet together. Later Gunvanthi and Yashoda cheer her up. Yashoda gives her word to Shagun that only she will have the right as Manmeet’s wife and no one else. Yashoda says she will teach Meet a lesson once she enters this house.

Meet complains to the police that Sarkar is the reason for Manmeet being handicapped. The inspector asks Manmeet for his statement. Manmeet says Sarkar doesn’t have anything to him being handicapped and says he accidentally put his hand in the machine and lost his hand. Meet tries to convince Manmeet to tell the truth to the police but Manmeet still sticks to his story. The police leaves from there after hearing Manmeet’s story. Meet asks Manmeet why did he lied? Manmeet says he did it to save her as he can’t protect her if Sarkar takes action against her. Manmeet asks Meet to leave her. Meet leaves from there.

Raj ask Meet if Manmeet gave his statement. Meet says to Raj that Manmeet lied to the police saying Sarkar didn’t do anything. Raj says he doesn’t know if Manmeet did the right thing or wrong thing by doing this and says whatever he did it is for her. Babita blames Meet for Manmeet’s situation. Raj tries to stop Babita but she still doesn’t listen to him. Babita says to Meet that Manmeet lost his strength and now she needs to become his strength. Manmeet video calls Sarkar and says with this Meet will fall right into their trap and they don’t need to do anything.