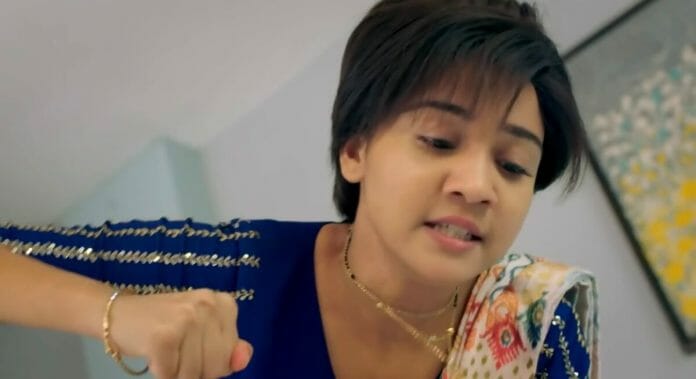 The episode starts with Meet Ahlawat going to a wrestling ground. Everyone cheers for a strong wrestler Bablu. Meet Ahlawat challenges him and decides to punish himself for not taking care of Meet properly. Anything could have happened to her on street. Bablu thrashes him and there Meet thinks in the garden area that she will obey Babita and won’t do any hard work. Duggu informs her about Meet Ahlawat’s situation. Meet rushes to the wrestling ground to stop the fight. She shouts Meet.

Meet Ahlawat gets injured and falls down. Meet holds him and asks him why he is torturing himself like that. Meet Ahlawat gets beaten more and Meet hugs him. She stops the counting of the people out there angrily and takes her husband back home. Tej waits for Ram and Lakhan’s return. Sunaina enters and says Ram and Lakhan are in the garden and hiding their faces as they lost the cooking competition. But she cracked the deal today. Tej says it’s good she succeeded but she has noone with whom she can share the good news. She is alone but he has two sons who will console him if he gets upset. Sunaina gets angry and says if she cant get pregnant, he is responsible for that. He has flaws and he couldn’t give her the chance to become a mother and she hears taunts because of him. Tej raises hand on her in anger and Sunaina stops him saying he doesn’t even have the guts to accept the truth. Tej says she destroyed the little hope today and now nothing can be fine between them.

Meet treats Meet Ahlawat’s wound and asks him why he is blaming himself for an accident. It is unnecessary. He says he is careless and he was calling himself the best father but he couldn’t even give attention to her and she was about to get hurt. Meet says he saved Duggu and it proves he is not careless. He is still upset and she decides to divert his mind and says he will change the pee and poty diapers of the baby, not she. He says why so? He will only change the pee diapers not the poty one. He says he will take his baby to the park for walk. She teases him saying he will stare at the hot mothers. He argues with her and then he holds a pillow in his arms and says he will talk to his baby everyday. Meet smiles seeing him.

Meet Ahlawat feeds Meet parathas, he holds her hand and helps her climb down the stairs carefully. She pulls his cheeks. There two constables talk about Shanty escaping from hospital. They decide to inform Meet. Isha tells Ragini that she invited Deep in the hawan. Babita says Deep made things right with his patience. They make all the preparations for Hawan. Meet Ahlawat worries for Meet when she is about to go downstairs. He says he can lift her up. She says she won’t come out of her room as he is doing extra now. She gets annoyed and he says sorry to her. There Shanty comes to Ahlawat mansion in disguise of a follower of Guruji. He says he will take revenge from Meet and will destroy her happiness completely.