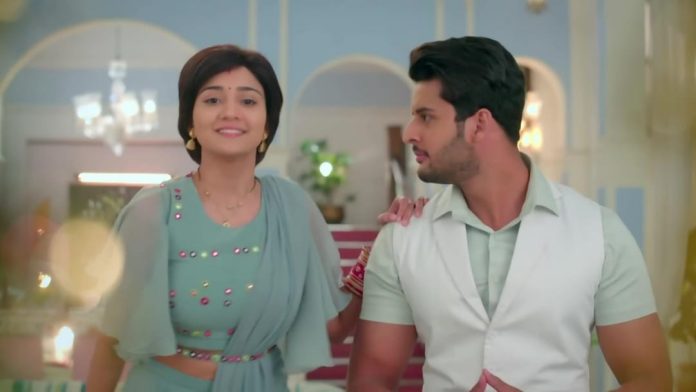 The episode starts with Ragini saying Meet Ahlawat is giving lecture on right and wrong and not thinking about her sister’s happiness because Isha is not his own sister. Masoom made big mistakes but everyone forgave her then why they cant see Isha’s happiness now. Babita asks Ragini what she is saying. Meet Ahlawat never differentiated between Masoom and Isha. They are one family. Ragini says but sadly they are not trying to see that Isha’s happiness is with Deep.

If Isha’s wedding gets cancelled then she will forget that they are one family. This shocks Ahlawats. Barfi gets happy to see all the drama and she finally created misunderstanding between Ahlawats. Now she will make sure Manjari goes out of the house. Barfi starts her drama and tells Deep that she is impressed seeing his obedience towards her and she can understand how much he loves Isha. So she permits him to marry Isha. Deep kisses Isha’s hand and sits in mandap.

Barfi says she is not that heartless that she will see two lovers are getting separated. But she can’t accept one thing that because of an outsider like Manjari Ahlawats are fighting with each other. Babita says Manjari wanted good for Isha, her intentions are not wrong. Meet Ahlawat says she wanted to save Isha from dowry only. Ram convinces him saying Isha’s happiness is with Deep, he is just giving presents to Isha from his side. That should not be considered as dowry. Barfi faced humiliation still she didn’t leave yet so they should not be rude to her again. Masoom also manipulates Meet Ahlawat saying Isha has waited for this moment for so long, they should not stop her from getting her love Deep. Meet thinks Meet Ahlawat should not get convinced by these people.

Barfi says everything is fine now and she just wants Manjari to leave the house before Deep and Isha’s wedding. She can’t witness it even as a guest. Meet Ahlawat objects but Ram stops him saying for his sister’s sake he won’t take Manjari’s side today. He won’t come under her influence. Ragini goes to Manjari and drags Meet from there. Babita tries to stop her but Ragini says today noone is important for her more than Isha. She won’t tolerate Manjari’s interference anymore. They should also choose Isha’s happiness only. She throws Meet out of the house saying the latter should not behave like she is real Meet Hooda. She is a duplicate one and she will never return back again.

Popat holds Meet and asks her what she got by trying to save Isha except humiliation. She even lost the chance to get her baby back from Manushi. Manushi comes and says she told Manjari not to be oversmart but she ruined the plan. Now she can’t get married to Meet Ahlawat and Ahlawats have become her enemies now. Manushi cancels the deal saying she won’t give any kid to Popat.

Meet breaks down to tears and there Barfi stops the phera and demands one more thing that Ahlawats should give the house to Isha. It’s for her good future as she won’t be able to stay without that comfort she gets here. Hosiyar tells Masoom that Barfi is really cunning. Ram questions Barfi but the latter says this wedding can’t happen if Isha doesn’t become the owner of Ahlawat Mansion. Meet says she sacrificed everything to save Isha. God should stop this wedding at any cost.