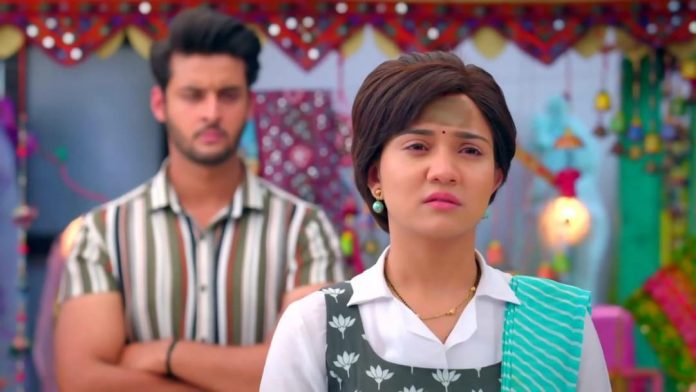 The episode starts with Barfi saying if she doesn’t get the mansion from Ahlawats then this wedding will get cancelled. Meet Ahlawat tells Ram that Manjari was trying to tell this to everyone that Barfi is a greedy woman but they misunderstood her now they have to keep fulfilling Barfi’s demands. Barfi unties the wedding knot and Deep tells her to stop.

Barfi drags him from there and suddenly Isha suffers a panic attack. Everyone goes to calm her down including Deep. Barfi makes fun of Isha saying she is doing drama and trying to separate mother and son. Ragini gets angry at her and says enough is enough. She says Barfi is a dealer who doesn’t have any emotions for Isha. She only wants money from them and nothing else. Ragini says Isha is not burden on her so she won’t give any dowry to Barfi. Meet hears that from outside of the house. Ragini realises her mistake and tells Meet Ahlawat that Manjari is their real well wisher and she only wanted good for Isha. But they insulted her and before it’s too late, Meet Ahlawat should call Manjari back.

Barfi takes Deep from there and is about to open the door but Manjari comes in. Barfi asks her why she came back shamelessly? Meet replies she doesn’t have time to waste. She questions Deep’s love for Isha. She says instead of being there for Isha he is supporting his mother. He only lectures about his love for Isha but in real he can do nothing for her.

Meet Ahlawat also tries to open Deep’s eyes saying he knows Isha will love him forever but still he is leaving her alone and going with his mother who is absolutely wrong. Meet says Deep doesn’t have guts to accept Isha by going against Barfi’s will. Barfi shouts at Meet but the latter shuts her up saying if she calls police here then Barfi will get good lesson and will get beaten for demanding dowry.

Barfi tells Deep to leave the place but he speaks up saying he is not leaving without marrying Isha. He won’t take a single penny from Ahlawats but he will earn enough money to give all comfort to his mother. He tells Barfi to bless Isha without complaining. Barfi leaves and Deep says sorry to Isha. She hugs him and there Meet Ahlawat looks at Meet and thinks noone can take care of his family and Isha like Meet Hooda can. So it’s confirmed she is Meet Hooda.

Deep and Isha finally get married and perform the rituals. Everyone gets delighted and Meet and Meet Ahlawat congratulate Deep and Isha. Meet Ahlawat tells Deep to take care of Isha. Ragini apologises to Meet and the latter forgives her saying an ice cream can boost her mood easily. Meet thinks once she gets her child back from Manushi she will live happily with Meet Ahlawat.