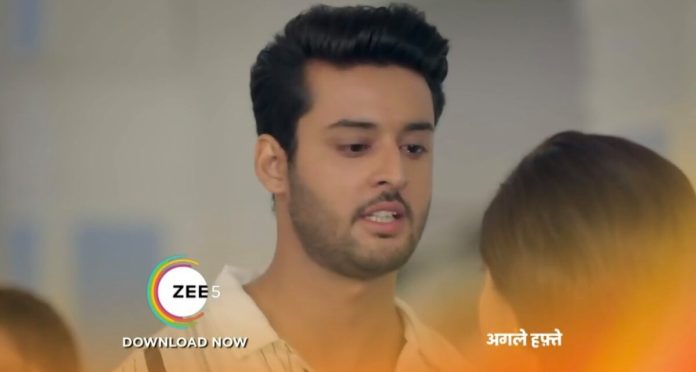 The episode starts with Shanty looking at the cook in the kitchen who makes pudding for Meet. Shanty poisons the pudding and thinks Meet will die after eating this. Meet thinks Shanty must be planning something and she has to stop him. But how will she do that. Cook gives the pudding to Meet saying Babita said Meet has to finish it. Meet is about to eat it but then she thinks something and calls an inspector who has the duty to check on criminals like Shanty. If they are in rehabilitation centre or not. She asks him if he is fulfilling his duty properly, the inspector gets nervous and lies that Shanty is in the rehab only. Meet cuts the call and there Shanty waits for Meet to die.

Inspector calls him and asks him to come back to the rehab immediately else he will lose his job for allowing Shanty to leave for one day and Shanty’s punishment will be extended too. Shanty says but how will he return back without seeing the result of his work. Inspector orders him to come back and the latter gets angry. Meet hears the recording of the inspector’s phone conversation in her phone. She says it means she was right and Shanty is not in the rehab but what urgent work he has.

Meet Ahlawat comes to his room and hugs Meet. He says why she hid about the cooker blast from him. He says he is really afraid seeing the continuous mishaps. Meet thinks now Shanty’s news will make him more tensed. The video starts playing mistakenly and Meet Ahlawat learns Shanty is not in the rehabilitation centre. Meet says she learned about it just now and now she wants to protect her family from Shanty. She decides to go to police station.

Meet Ahlawat stops Meet and makes a line near the door with teddy bears and toys. He says Meet will not cross this line and she should not forget that she is a wife and now she is their child’s mother so she should just think about her baby’s safety. She won’t take any risk and he gives her swear. He leaves and Meet thinks how will she convince him that she needs to go out. Meet again tries to eat the pudding but the house help asks her for laundry. There Shanty leaves with his men saying they cant stay back.

Ahlawats allow them to leave and Meet gets suspicious hearing about their sudden exit. She calls the Head Guruji and sends him photos of Shanty and his recruits. Guruji says he doesn’t know them and they are not his followers. Meet gets shocked to know that and recalls the strange things that were happening such as ciggerate, electric wire, Isha’s fear etc. She thinks it means that was Shanty and he tried to kill her more than twice. She looks at the pudding and thinks she should not eat it as it can be poisonous. She puts it in the dustbin.

Ragini comes to ask Meet if the latter wants anything. Meet asks about her husband and Ragini replies he went with Param ji to drop them near highway. Param ji asked for lift. Meet gets shocked to hear that and feels Meet Ahlawat is in danger for sure. There Meet Ahlawat drops them and is about to leave but Shanty’s men attack him with rod. Shanty shows his real face and removes the wig and fake beard. Meet Ahlawat loses his calm and says how dare you try to harm my wife in disguise.

Shanty says Meet will die after eating the pudding soon and now it’s Meet Ahlawat’s turn to get beaten. Shanty’s men beats Meet and the latter tries to save himself. There Meet feels Shanty didn’t talk in front of her as he knew she will recognise his voice. She thinks she has to cross the line her husband made as he needs her help right now.