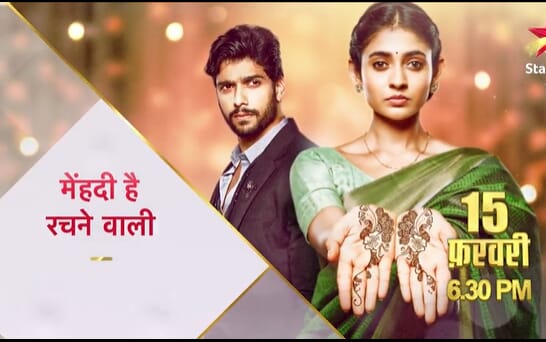 The episode starts with Sunny says to Pallavi that diamond belongs to Raghav and Abhishek worked for Raghav and this diamond is smuggled by Raghav with the help of Abhishek. The fate has played it’s own game that’s why Abhishek throwed the diamonds that too in her shop.

Pallavi says to Sunny that she knows that once upon a time Raghav did illegal business but he promised her to not to do anything such. She then recalls how she asked Raghav to promise her not to get involved in anything that’s illegal. Sunny laughs and says to Pallavi that Raghav made joke of her promise and tells that Raghav still involved in smuggling business. If she still doesn’t understand anything then she will be the one who look like a fool and gives her the diamond asking her to show Raghav and see the reaction. He then leaves.

Pallavi looks at the diamonds in her hand and gets worried. Keerti asks what he is talking to Pallavi. Sunny asks Keerti to relax saying that Raghav and Pallavi’s love story is coming to an end. Pallavi recalls the promise Raghav made for her and sees Farhad is entering the house. She follows and sees both Raghav and Farhad is tensed. She thinks when the person knows something the person will act this way only.

Raghav enters his room and finds the diamond pouch on his bed. Pallavi waits outside the room and sees reaction of Raghav. Raghav sees the diamond and says to himself that it looks like the one they are searching for. He then calls Farhad and informs him he found the diamond and he will keep this in the locker also he dont want Pallavi to know anything about this.

Pallavi gets shocked. She then enters the room. Raghav gets shocked and tells Pallavi that he will explain her everything but Pallavi refuses and tells him that because of him Abishek is dead and reminds him about the promise he made to her and asks him why he broke her trust. Raghav tells Pallavi that he didn’t killed Abhishek also he dont want to change himself because this is how he want to do his business.

Pallavi tells Raghav that he may not have shot Abishek but because of him only Abhishek is dead. Raghav tells Pallavi that he dont want to change anything about him. Pallavi blames herself for trusting him and being blind because of his promise and started praising him but now she realised how much of a fool she is. She also tells Raghav wrong is wrong no matter how many good things he may do that wont sumup his wrong doings. She blames Raghav for taking advantage of her trust for him and asks again why he did this.

Sunny comes there and tells Pallavi that he told her everything not to hear her lecture but to make fulfill her promise. He tells getting a slap from his wife will made Raghav Raghav realises what real shame is. Raghav gets angry and holds his collar calling him bastard. Jaya Keerti and Pallavi separates Raghav and Sunny.

Sunny tells that Raghav did all the wrong things and here he is calling him as a bastard. He then tells Jaya about Raghav’s smuggling business. Jaya tells Sunny that she knows all this but unlike him Raghav is good at heart. Sunny then asks Pallavi is she going to.leave this matter here itself or going to.punish her husband.

Pallavi takes the diamond pouch from him and leaves the house. Pallavi goes to Deshmukh’s house and cries at Sharda telling whatever happened. Keerti says to Jaya it’s all happening because of Pallavi and asks Jaya that Raghav is doing all the wrong things and they are questioning her husband how dare they. Pallavi says to Sharda that Raghav broke her trust now she is torn between to do the right thing or cover up everything and asks Sharda to guide her.

Sharda tells Pallavi evem she dont know what she will do if she is in that situation. She also talks about her and Vijay’s relationship and tells that she tries to understand his doing from his point of view so she has to do the same to Raghav and give him another chance to realise his mistake and change into.a good man.

Pallavi tells Sharda that Abishek knows the risk of getting involved in this also Raghav didn’t forced Abhishek to.do this work so for Raghav he is right. Sharda nods her head. Pallavi tells Sharda that she dont want Raghav to hate her and involve in more wrong things this is what he do if she goes to the station. She wants Raghav to become a good person how she all this while thought about him and she will be there to change him in a better person. She also tells that she knows its difficult to change Raghav’s thinking but she will do everything with the power of her Love also God’s blessings.

Precap: Raghav comes to home fully drunk. He asks Pallavi she went to police station right to make him arrest right and hold her arm tightly. Pallavi says to Raghav that he is hurting her. Raghav leaves her. Later Pallavi tells Raghav that she wont leave his side and will change him into a better person. ACP comes to the house. Both Raghav and Pallavi gets shocked seeing ACP.