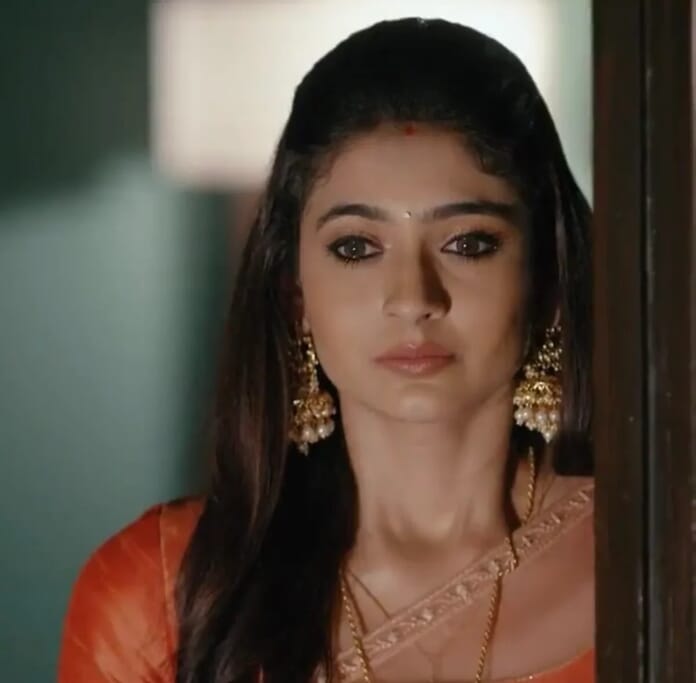 In viewers favorite show Mehndi Hai Rachne Waali Raghav arranges Ganpati festival in his house when he hears Pallavi’s conversation with Nikhil but he also makes sure that he is not forgived Pallavi yet. Now it will be interesting to see what will Pallavi do to make Raghav and Jaya forgive her? Will Jaya gets to know about Raghav’s illegal business?

In the current track it shown that Vijay brings God’s idol to the house when he stumbles Nikhil comes there and stops the idol from falling. Everyone gets happy seeing him. Nikhil takes everyone’s blessings also apologises to Sharda for not being there for her when she needed him the most. Later Vijay tells that Pallavi isn’t allowed in the house and starts the puja. Nikhil calls Pallavi and shows her the puja which is taking place in Deshmukh’s house. He also asks her why she hadn’t done any preparation yet as it’s her favorite festival. Pallavi tells this Year the situation is different and tells Nikhil that she will meet him next day in their shop. Ragha hears everything and goes downstairs thinking about how upset Pallavi sounds. He then hears Sunny is making unnecessary noise inside the house so he asks Sunny to be in his limits. But Sunny threatens and mocks Raghav which leads and furious Raghav to give him a one final warning and leaves the place. Sunny determines to find what Raghav is hiding from everyone. Raghav asks Jaya’s permission to arrange the puja. Jaya tells him that she didn’t forgived Pallavi yet at the same time she wont say anything for the puja being conducted here. Sunny enters Raghav’s room but then he hides himself when he hears Farhad’s voice. Raghav comes there and tells the guy Abhishek who police caught to save his life which is more important than anything also explains him how he dont pay any taxes to the government that’s why he is getting diamonds at such low rate. He then asks Farhad to take care of everything because he has some other works to do. Sunny decides to do something with the information he has against of Raghav. Pallavi gets happy when she sees Raghav bring the idol to the house. She thanks Raghav also asks him to talk to her saying she can’t tolerate his silence. Raghav asks Pallavi to go back to time and stop Keerti marrying Sunny. Pallavi gets shocked. Raghav then tells Pallavi that he is upset with her whatever happened they cant change it but it all happened because of her only and leaves. Then they both looks sad from either side of the door. Later Deshmukh’s comes to Raghav’s house and does a dance performance. Jaya greets them and invites them inside. Sharda asks Pallavi about Raghav. Pallavi tells Sharda that Raghav is upset with her yet he is doing all this make her happy so she is so lucky to have Raghav as her life partner. Sharda asks Pallavi to have faith in God and her Love. Jaya asks the Priest to start the puja saying the entire family is here but Keerti comes there with Sunny and tells the family is completed now only. Raghav gets angry and thinks to himself that how could he will forgive Pallavi because of her only now someone like Sunny become a part of their family.

In the upcoming episode it will be shown that Raghav and Pallavi will do the aarti. Pallavi will look at Raghav but he will look away from her. Later Pallavi will say to Sunny that she stopped him from doing the aarti because she dont want someone like him who does so many things to do aarti for God. Sunny will mock Pallavi and reveal that Raghav isn’t paying the taxes for diamond which is illegal and calls Raghav as a smuggler. Pallavi will get shocked.