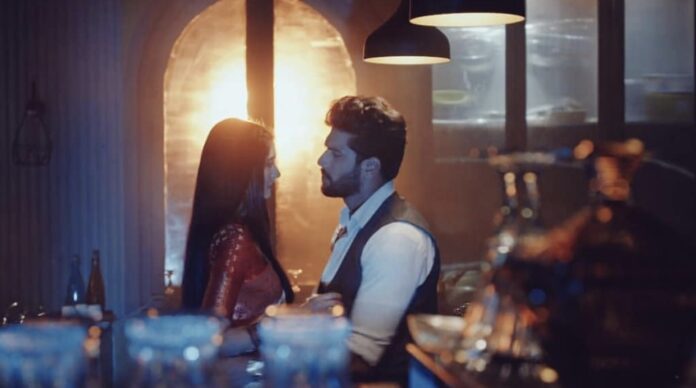 In viewers favorite show Mehndi Hai Rachne Waali Raghav shares how he feels when Pallavi spends time with Mandar but Pallavi assures him that she will be with him no matter what. Raghav arranges a wedding photoshoot which he and Pallavi planned already. Now it will be interesting to see how Raghav is going to stop Pallavi from meeting Mandar? What will Vijay do to bring Pallavi to the house for Mandar?

In the current track it shown that Pallavi tells Raghav once Mandar recalls his past they all can able to move on in their life. Raghav asks Pallavi what will she do if Mandar recalls his love for her. Pallavi tells Raghav that time she will let him remember his Love for her which changed her as a person today she is then signs him I love you and hugs him.

Raghav receives a message from Mandar in which Mandar challenges Raghav that just like the way he made Pallavi wear the bangle he is going to make Pallavi wear a saree which he is going to buy her. In the middle of the night Raghav gets a nightmare that Mandar is about to put the mangalsutra on Pallavi then wakes up and looks at Pallavi and the bangles which she has in her hand.

Mandar tells the Deshmukh’s that on his wedding night he went to meet the jeweller to buy the bangle which he wanted to gift it to Pallavi but he met with an accident. Sulochana encourages him. Vijay also supports Sulochana but Sharda warns them also asks them to help Mandar recall his past because he spend more time with them not with Pallavi.

In the morning Pallavi gets worried when Raghav tells that he arranged a wedding photoshoot then he takes her inside the room and shows her dress and jewelry. Pallavi asks Jaya to get ready so that they can take a family picture too but Keerti leaves the place saying that she dont want to be a part of this.

Raghav helps Pallavi gets ready, he makes her wear the jewelry. Jaya gets happy seeing Raghav and Pallavi posing for the picture then tells Raghav the only good thing he did is decide to marry Pallavi.

Raghav then takes a selfie of them then sends it to Mandar with a voice note stating that the bangle which he gifted Pallavi is not in Pallavi’s hand now. Keerti meets Mandar and apologises to him but Mandar tells nothing is going to change because of her apology.

Keerti tells Mandar that she understands the pain he is going through because Pallavi is not by his side. Mandar gets shocked and looks at Keerti.

In the upcoming episode it will be shown that Raghav Pallavi and Jaya will happily poses for the photoshoot. All three of them will have so much fun during the photoshoot. Mandar will ask Pallavi to come closer then he looks at their reflection and say that they did the same as a part of their marriage ritual right.
Pallavi will get uncomfortable. Sharda will get angry and throw the mirror. Mandar will get shocked. Raghav Pallavi and Mandar will meet. Raghav will say to Mandar that it’s weird he is recalling his past only when he is spending time with Pallavi alone.