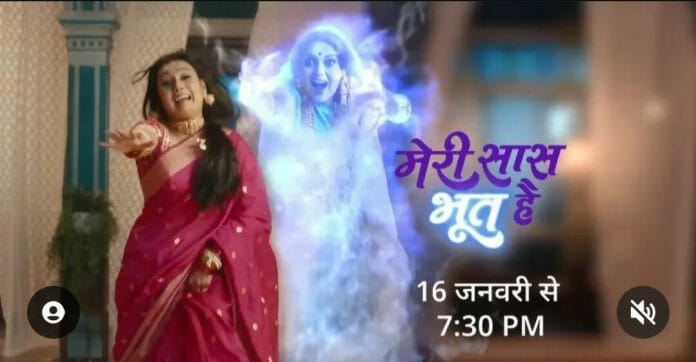 In today’s episode, Gaura collides with Som but they don’t see each other’s faces. Ganga screams in pain as a pin gets stuck in her leg. Gaura sees it and helps Ganga by removing the pin. Twinkle’s mother tells Twinkle that she will not get better life partner than Som. They reach a particular spot where Rekha asked them to meet and call Rekha. Rekha hesitates to pick up the call in front of Kanchan. Kanchan forces her to pick up the call. Rekha talks to Twinkle’s mother.

Kanchan understands that Rekha is looking for girl for Som. Ganga praises Gaura for her helping nature. Gaura says that her father always asks her to help and respect the elders. Ganga gives her blessings to Gaura. Gaura says that she really needs blessings to get rid of Champak Churel. She leaves with Chanchal. Kanchan tells Ganga about Rekha’s plan to meet someone for Som’s marriage and asks Ganga to act like she is unwell.

Ganga screams and falls on the ground. Som asks others to take Ganga home and says that he will bring the doctor. Rekha says that she will stay back to see the arrangements. Twinkle and her mother come there and call Rekha. Rekha hides her face and pretends to leave as others were present there. Twinkle sees Som and finds him very handsome. She tells her mother that she has fallen in love with Som at first sight. Som also sees Twinkle.

Gaura attends a funeral of a old lady to do the work of her father who is a priest. She learns how the lady died and prays for her soul. Som recklessly drives car to reach to the doctor. His car stops working suddenly. Rekha keeps getting calls. Kanchan worries for Ganga. Rekha says that it’s normal in in age of 75. Ganga says that she is only 70. Rekha says that Ganga is fine now so she will go to temple to offer Prasad to God as per her mannat. Kanchan touches Rekha and says that her body is so cold. Rekha recalls Pandit’s words about her life span.

Som sends Girish to call the mechanic. He gets call from his cousin and learns that Ganga is fine now. Rekha takes permission from Ganga and leaves to meet Twinkle and her mother. Kanchan informs Ganga about Gaura. She calls Gaura suitable for Som and tells that she will collect more information about her. Ganga informs Kanchan that she has appointed the maid to keep eyes on Rekha’s activities. The maid agrees to do the work for 2000 rupees.

Rekha sends a voice message to Som and sends her Twinkle’s photograph. Som likes Twinkle. Gaura sees crow again and gets scared. She starts running and collides with the people of a last rites. The dead body falls on Gaura. She gets more scared. She starts running again. She sees Som’s back side and gets relieved. She hugs Som from the back. Rekha meets Twinkle and her mother. She gets super impressed seeing Twinkle and kisses on her forehead. The episode ends.

Precap – Rekha says that she will fix Twinkle and Som’s meeting. Som sees Gaura is hugging him tightly and not losing her grip. He accompanies Gaura.