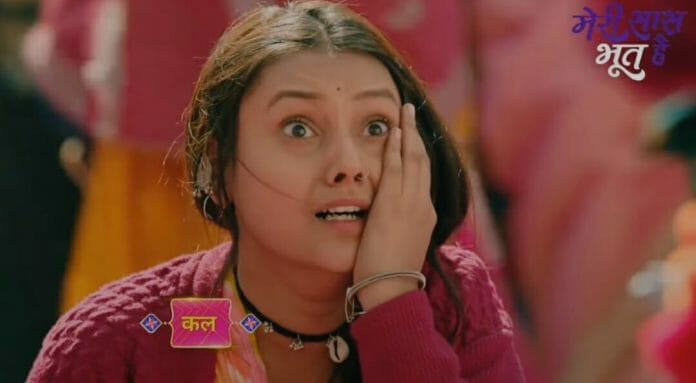 Star Bharat’s recently launched show Meri Saas Bhoot Hai is a horror comedy show which revolves around Gaura and her late mother in law Rekha. How Gaura’s life turns into a nightmare when Rekha’s ghost starts troubling her during her time at her husband’s house after marriage will be interesting to watch.

In the previous episode, Pandit spots MLA’S daughter Twinkle and gives Som’s marriage proposal to her mother. Pandit Ji’s assistant informs him that Twinkle ran away twice from home and twice from her marriage venue. Pandit calls Rekha and informs her about Twinkle. Rekha says that she knows Twinkle’s mother personally. Som tells her that he will marry someone whom he will like and the girl should not be just beautiful but educated and matured.

He asks her to help Ganga and Kanchan in choosing his life partner. Gaura, Chanchal visit the fair. Rekha also goes there with Kanchan, Ganga and Som. She tries to show Twinkle’s photograph to Som but fails. Som schools Prince for fooling a foreigner. Gaura gets scared seeing a crow as she thinks that her late uncle has become crow after death.

She collides with Rekha and gets scared. She calls her Champak Churel. Kanchan sees it and thinks that the girl has identified Rekha well. She thinks that Som should get married to a girl like her.

In the upcoming episode, Gaura helps Ganga in the fair by removing pin from her foot. Ganga gives blessings to Gaura. Gaura says that she really needs blessings to get rid of Champak Churel. Rekha meets Twinkle and her mother. Rekha likes Twinkle. Gaura runs being scared. She collides with Som and hugs him.

To know what happens next stay tuned to Meri Saas Bhoot Hai on Star Bharat/Hotstar and this space.