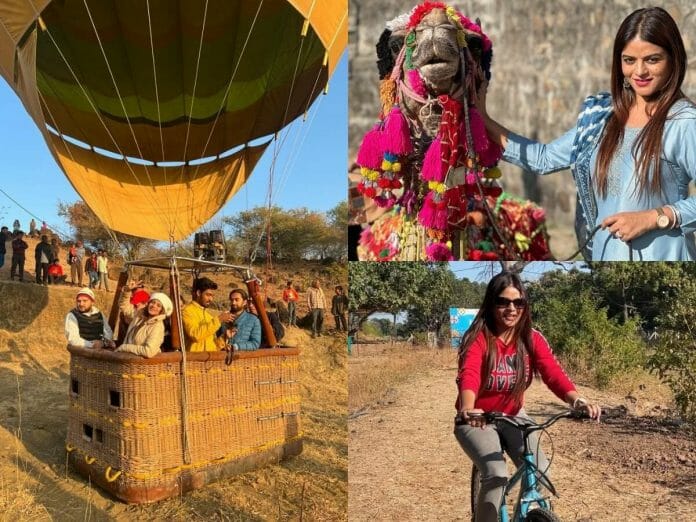 Actress Mitaali Nag recently attended the Mandu festival and is in awe of the beauty she experienced during the three-day retreat. The actress says that a festival is amazing and one that should not be missed.

“I feel absolutely delighted to have been invited to attend the Mandu festival. Mandu is a hidden gem. There is so much to be explored there. After the 3 days at the festival, I came back rejuvenated and energetic,” she says, adding, “Everything was special…Almost everything from living in the tent, to visiting the monuments, to cycling around the tent city, to having rural lunch, to buying local handlooms, to taking the hot air balloon ride, to paragliding in the amazing weather was an experience that made the 3 days something that I will never forget.”

Talking about attending the festival with Amit Tyagi, executive editor of India today group, she says, “Amit ji is such a warm and experienced company. Other than being the executive editor of the India Today group, he is also a travel journalist and he has visited the Mandu festival twice before. So, he always provided me with extra knowledge about the places and the stuff that we were doing. It was great to have him as my travel partner.”

The three-day festival had so much to do, says Mitaali, adding, “I lived in a tent which had almost 5 star services. I had a rural lunch in the middle of a chickpea field overlooking the Jahaz Mahal which has witnessed the love of Roopmati and Baaz Bahadur. The amazing part was that the vegetable that was served to us was freshly picked from the farm and cooked. The most exciting part of the lunch was when I made Jowar chapati with my own hands. I did yoga listening to morning ragas. I did some cycling which took me back to my school days. The hot air balloon ride and the paragliding were the most thrilling experiences of the trip and a first for me. I also saw a concert of one of the leading bands of the country. It was awesome to dance with live music. We visited heritage sites and the monuments which are the tourist attractions of Mandu. I saw the sun set from the helipad. The tag line of Mandu “Khojne mein Kho Jao” truly fits the place.”

Mitaali adds that the food was amazing as well. “The everyday lunch, dinner and breakfast was pretty scrumptious. It had soups and salads and Indian dishes. But the rural lunch was exquisite. The makki and jowar rotis were being made fresh on the chulha. The chatni and vegetable was made of ingredients fresh from the farm where we were actually eating our lunch. The food has local flavour and the rural touch made it special. I also had the Paaniya, which is their version of Dal Baati. I tasted the biggest Imli (Tamarind), something that is only grown on a tree called Baobab and it is available only in Mandu.”

She says, “During the day the sun really shines bright. But evenings were pleasant. The weather would be truly romantic as the sun set. And the nights and mornings were cold. But not freezing. Good cold! I felt the three days at the Mandu festival were less to explore and experience the magic of the place. There was so much that I couldn’t see or do. I am looking forward to visiting the festival next year too, especially with my son so that he gets to know about the gems of our country.”