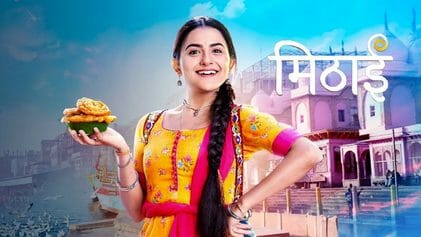 The episode starts with Karishma praising Mithai’s look. She asks Mithai to come saying she is hungry. Abhishek and Girish see Mithai and act like they didn’t notice that today is her birthday. Indu complains to Chandrakantha that she is hiding from Mithai. Indu says to Chandrakantha that Mithai might misunderstand that she forgot her birthday. Chandrakantha says to Indu to make sure Mithai doesn’t find out that Sid is planning a surprise for her. Mithai comes to take Indu’s blessings but Indu says to Mithai that she has a lot of work and asks her to come later. Sid asks Dadu to act well. Dadu says he can act better than him. Mithai goes to Dadu to take his blessings.

Dadu just gives his blessings and doesn’t say happy birthday to her. Mithai feels that everyone forgot about her birthday. Sid talks to Mithai and calls for everyone and Mithai thinks he is going to talk about her birthday. Sid says they have to go out tomorrow and asks everyone to get ready. Mithai feels that she should remind Sid. Mithai goes to talk to Sid. Sid acts infront of Mithai as he is busy with the accounts and Mithai asks if he is forgetting anything. Sid apologizes to Mithai and says today is the last date for GST Payment and thanks Mithai for reminding him. Mithai feels sad. Mithai asks if he is forgetting anything. Sid says if there is anything she can remind him.

Geethika apologises to the family and on behalf of Pramod and Shubham. Dadu also asks Sid to forgive him. But Sid just leaves from there. Sid goes to his room. Mithai goes after Sid and tries to convince Sid to forgive Pramod and Shubham. Sid says he can’t do that. Mithai still tries to convince him. Sid says if she trusts them then she will regret it. Harimohan and Girish also try to convince Sid. After Sid talks with them agrees to forgive them and says if they made this kind of mistake again then he will never forgive them. Mithai goes to Geethika. Dadi asks Sid what is he planning for the night or they will be fighting all night. Sid says there will be no fighting.

At night when Mithai comes to the house, she sees it is dark and thinks everyone might have went outside. Sid gets on his knees and gives a rose to Mithai saying he thought of teasing her that’s why he acted like he didn’t remember her birthday and says he loves her. Balloons fall on Mithai and Sid and all the family members come to greet Mithai. Sid comes with a cake. Sid lights the candle. Mithai blows the cake and cuts the cake and feeds it to Sid and all the other family members. Geethika brings Pramod and Shubham to Chobe’s house. Pramod apologises to everyone. Shubham apologises to Dadu and everyone. Harimohan forgives them. Pramod asks Sid if he will ever forgive him. Sid says not to talk like that and he patches up with Pramod and Shubham. Sid says he has an announcement to make and says Mithai has got best business woman of the year award. Mithai takes the letter and hugs Sid. Mithai recalls her father and thinks to herself she got a little closer to her goals. Indu says to Mithai if her father is here he would have been happy seeing this. Mithai hugs Indu.