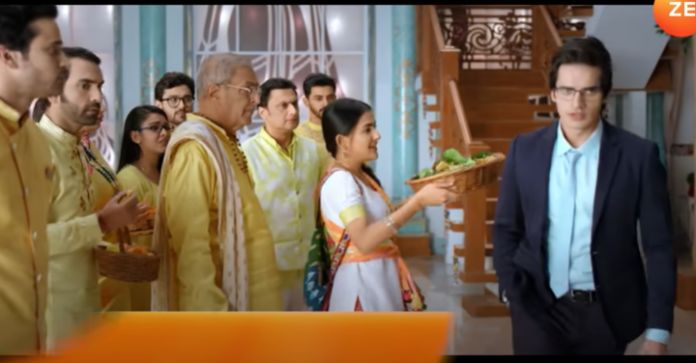 The episode starts with Mithai dividing the work and says we need Sid’s help. Chandrakantha says what will he help because of his mistake we are here. Mithai says mistakes are done by humans. And he might be feeling guilty because of what he did. Hari Mohan tells her to give it a try.

Mithai and Sid meet. Mithai says she has got an idea of how to make money. And he needs to open a company in his name. Mithai tells him her plan but he doesn’t listen to it. Sid asks her to sign the divorce papers as Girish asked for it. Sid convinces Mthai to sign on the divorce papers and says if she doesn’t then. We will be in jail along with Harimohan. Mithai signs on the divorce papers. She says she did what he asked. Now he has to do what she asks. Sid tells first to bring a turnover of Rs 50000 then we will talk. Mithai accepts his challenge and says she will make a turnover of Rs 50000 then we will talk.

Sid tries to hit the mirror. Shubham stops him. He asks him to not hurt himself. He says he did a mistake with Mithai for dad’s love and lost Our grandparent’s trust. He asks Sid to never thinks wrong about Mithai as she is good. Sid asks if Mithai sent him. Shubham says first he made me a puppet to hurt Mithai and now he made you a puppet to hurt Mithai. And your best friend Apeksha helped him in this. Sid doesn’t believe it. Shubham gives him Girish’s phone and asks him to check the call history. Sid sees many calls of Apeksha. Shubham asks him to call Apeksha without saying a word. Sid calls her. Apeksha assumes it’s Girish and asks if he took the sign of Sid and Mithai on the divorce papers. Sid says Apeksha. She gets shocked. Shubham says Girish used Apeksha as a pawn and trapped you. Girish slaps Shubham.

Karishma sees Sourya is having problem while reading. She tells him that she contacted lenskart for his help. Sourya thanks her. Hari Mohan and Mithai discuss how they are going to advertise. Girish says he can’t allow Shubham in his place. Sid asks Girish how low he falls? He announces that he will never marry Apeksha. He tries to leave the house but Girish threatens him. Abhishek and Abha request Sid to not leave the house. They ask Sid to listen to Girish’s words. Girish ousts Shubham.