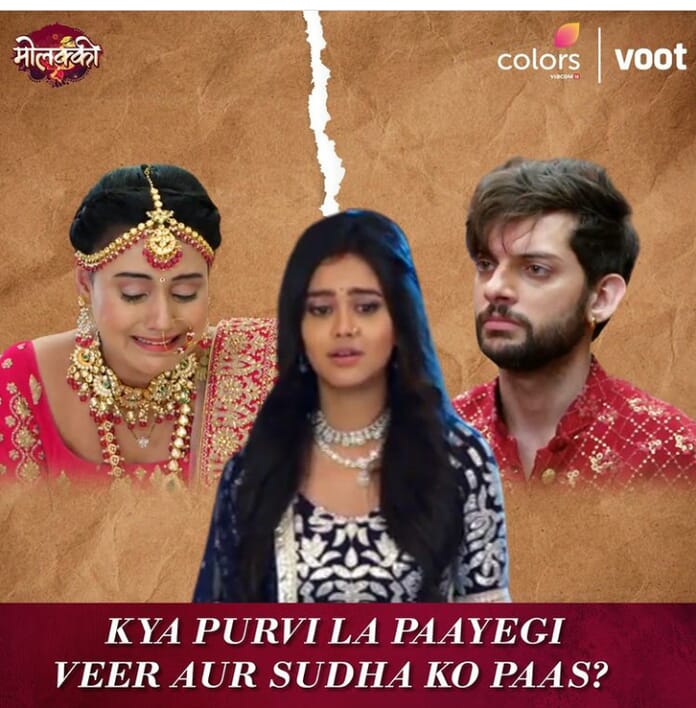 The episode begins with Priyashi tells Daksh that Purvi and Virendra shares special relationship. She reveals everything about Purvi and Virendra to him. He refuses to believe her and asks her that is she mad or what. She tells him that everyone in this village knows Purvi and Virendra trying to make Purvi remember the past using the latter. He asks Priyashi that why she is telling all this to him. She reveals that Purvi is her elder sister and Purvi destroyed her life so she want to save him from Purvi. He tells her that she is lying. She asks him to think what she said and escapes from there. Anjali and Prakashi sees them together. Anjali tells Nani that she saw Daksh and Priyashi together.

Next day, Daksh searches Virendra. Nani asks him that where is he going and tells him to select design for Purvi’s mehndi. He tells her that he need to talk to Virendra and leaves from there. He learns that Virendra left the palace for some work.

She pleads him to take Purvi from this hell. Nani tells him that now he would have understood that why Virendra got close to their family. She says to him that Virendra brought them to his village to stop this marriage. Daksh tells them that Purvi just belongs to him and he is Purvi’s future so he will protect Purvi from Virendra.

Later, Purvi’s mehndi ceremony begins. Daksh dances with Purvi. Prakashi tells Nani that Virendra is not here it proves that he is planning to do something. Virendra brings Purvi’s mother to the palace to make Purvi remember the past. Purvi gets emotional seeing her mother and she moves towards her and refers her as mother which shocks everyone.