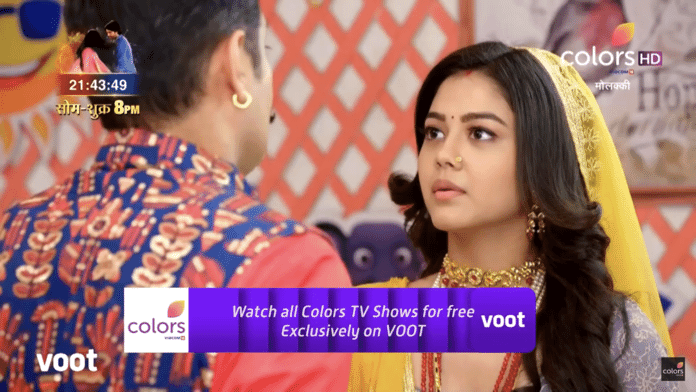 Colors show Molkki never failed to engage audience with its gripping storyline. Now, Sakshi became ‘sarpanch’ of the village so it will be interesting to watch that what going to happen in the future episodes.

Earlier it’s seen that, Purvi asked gift from Virendra. Kids gifted bangles to Purvi. Virendra asked kids to help him to select gift for Purvi but they refused to help him saying that he should select by himself. He gifted ‘kamarband’ to Purvi and made her wear it. They celebrated Diwali with kids. Next day, Virendra convinced Purvi to participate in the election to become a ‘sarpanch’. Sakshi submitted form to election officer. She informed Virendra that Arjun took all the blame on himself. Purvi challenged Sakshi.

In the upcoming episode, Kids will tell Sakshi that they wants Purvi to win the election. During election rallies, Purvi will help the pregnant woman. Virendra will praise her for that and he will taunt Sakshi for just clicking pictures with village people. Sakshi will insult Purvi by telling that she is just a Molkki. Purvi will defend herself and will say in her speech that Sakshi failed as a mother and she even betrayed her own family. Sakshi will talk about Purvi’s involvement with Arjun, Daksh and Vipul. Purvi will reveal Sakshi’s wrongdoings.

Later, Virendra will tell Purvi that she will become a ‘sarpanch’ of this village for sure. Election will get over. Election officer will announce that Sakshi won the election so she is the new ‘sarpanch’ of the village. Virendra will ask him to recount and after recount too result won’t change. Sakshi will recall that how she cheated to win. Prakashi and Anjali will congratulate Sakshi.

Will Purvi accept that she lost against Sakshi? What will be Sakshi’s next move?