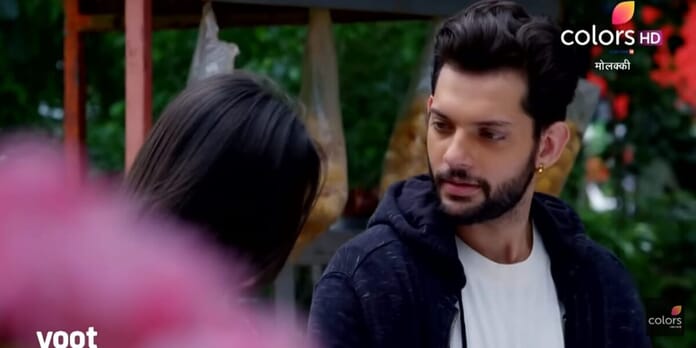 Colors show Molkki never failed to engage audience with its gripping storyline. Now, Purvi trying to save Virendra’s life so it will be interesting to watch that what going to happen in the future episodes.

Earlier its seen that, Purvi and Virendra left the house. Aarav noticed that and he informed about it to Chaudhary. Virendra and Purvi reached their date location and they spend time together. Prakashi tried to instigate Nanthini against Purvi but failed. Anjali told Priyashi that no one will be in the house except her and Veer and asked her to use the chance properly. After finishing their date, Virendra and Purvi was returning but the car stopped in the middle of the jungle and Chaudhary and his goons chased them.

In the upcoming episode, Virendra and Purvi will hide to escape from Chaudhary and his goons. Other side, Priyashi will get ready in red saree and she will take Veer to the room and will ask him to click her pictures and he will click it. After some time, she will tell him that she is tired and will bring juice and will give spiked juiced to him then he will lose his consciousness after drinking it and she will click pictures of their intimate positions and Anjali will record everything in her mobile.

Chaudhary will find Virendra and will shot him and Purvi will scream for help. He will call Aarav and will ask him to prepare for Virendra’s last rites. Meanwhile Veer will regain his consciousness and will ask Priyashi that why she is crying and he will be shocked seeing their pictures and will tell her that he has no idea that how it happened. She will tell him that now no one will marry her so she has no option than dying. So he will tell her that he will marry her.

What Anjali going to do with that recording? Will Veer learn about Priyashi’s plan?