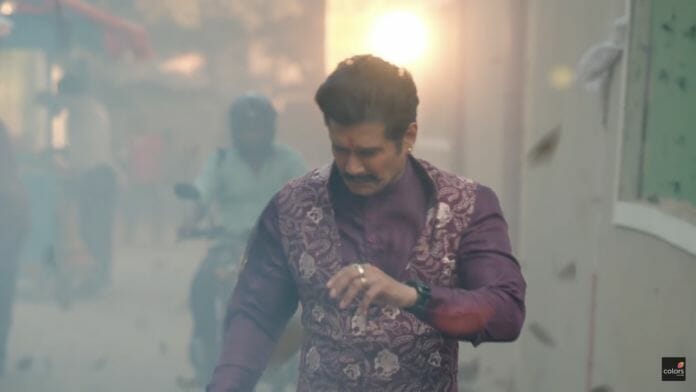 Priyal Mahajan and Amar Upadhyay starrer Colors show Molkki never failed to engage audience with its gripping storyline. Now, Virendra’s enemy Gajraj returned and he joined hands with Prakashi. And Gajraj is Satyam only but except Prakashi no one knows the truth of Gajraj. Gajraj throws Virendra and others out of the palace and he is trying to get Purvi so it will be interesting to watch that what going to happen in the future episodes.

Earlier it’s seen that, Purvi tried to make Virendra hate her. And he wondered that why she is behaving weird. Purvi told herself that she is doing all this so Virendra hate her and throw her out of the house then only she can enter the palace to get revenge from Gajraj. Virendra saw Purvi with Gajraj and he attacked Gajraj. But Purvi stopped Virendra which shocked him. Later, Purvi learnt that someone want to kill Gajraj.

In the upcoming episode, Purvi will save Gajraj and she will be attacked while saving him. He will take her to his room and he will call the Doctor. Virendra will leave the house to find Purvi. Doctor will treat Purvi but she will stop breathing. Doctor will try to save her but he could not. Gajraj will hold Doctor at gunpoint and warn him to save Purvi. Meanwhile, Juhi and Manas will pray to God for Purvi. Doctor will save Purvi. Then Doctor will meet Virendra and he will inform him about Purvi’s heart attack and also about Gajraj’s behaviour. Purvi will notice tattoo on Gajraj’s hand and will think that she have seen this already. Security guards will stop Virendra from entering the palace. They will beat him up when he tried to attack Gajraj. Purvi will find Renu’s nuptial chain and she will wonder that why Gajraj has it.

Will Virendra be able to meet Purvi? What will be Purvi’s next move?