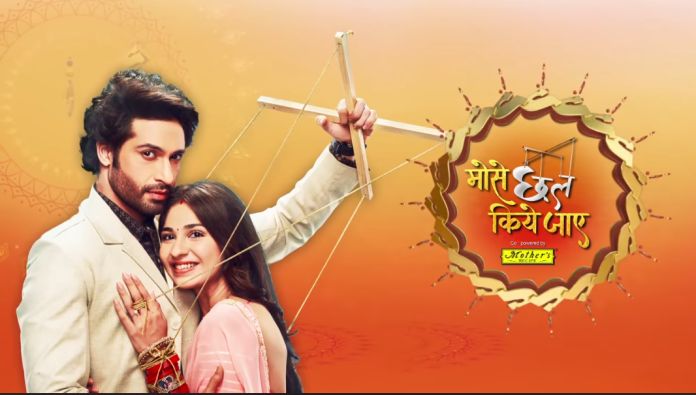 The episode starts with Goldie asks Prisha if she isn’t the one who kidnapped then who kidnapped the kids. Prisha says it’s not her then pleads Saumya to trust her saying she is equally worried about the kids also she will never harm the kids. Saumya tells that she isn’t ready to believe her words. Prisha tells that she is ready to do whatever she is asking her to prove herself innocent.

Saumya asks her is she sure and the latter says yes which leads Saumya to ask her to stay inside the house only until she gets her kids back. She also asks her to give her mobile and the house keys. Prisha agrees and gives everything to Saumya asked her to. She also pleads again to Saumya to trust her. Saumya takes Prisha’s phone and house keys and locks the door of Prisha’s home then leaves the place. Armaan carries a suitcase filled with the money with him. He talks to the kidnapper on the call like he is on his way also assuring that he will reach the place on time. He then cuts the call.

Goldie says to Armaan that he is also going with him but the latter refuses saying he appreciates his concern but they can’t risk anything. Goldie tells Armaan that they never know what the kidnappers are capable of doing so he wants to be with him. Armaan tells they can’t take risk. He may not be a cop but what if the kidnappers misunderstands it and does anything to the kids which may put their life danger. He also tells Saumya that they cant take risk. Saumya agrees with Armaan and asks Goldie to listen to Armaan. Goldie agrees. Armaan thanks then leaves the house saying even the kidnapper asked him to follow the directions and he doesn’t know the exact location. The family members looks on worriedly. Sushma and Harsh goes inside.

Saumya hears the recording again and again. She tells Goldie that she heard the wind chimes sound which is close to her heart. She then recalls how she talked to Armaan about this wind chime sound is soothing but Armaan asks her to remove it saying it’s annoying him also suggests her to put it in the kitchen and enjoy the sound while working there. Saumya removes the wind chime from their room. The FB ends.

Saumya tells that she is sure this is the same wind chime but Goldie asks her how she is so sure because all wind chimes sounds are same only. Saumya says that she has a special connection with this particular wind chime because it’s her father who gave it to her. She then once again hears the recording and tells Goldie the kids must be where the wind chime is. She calls Sushma and asks her where is the wind chime which she gave it to her. Sushma tells her that she don’t remember anything because it’s been years. Harsh encourages her to recall. Sushma tells that Prisha made so many changes according to her taste so she may know about it.

Goldie tells Saumya that they can’t exactly ask Prisha about this because if she is the real culprit behind these chaotic situations then it will put them in more trouble. Saumya tells her gut feelings tells her something which she is going to listen. She calls Shilpi who enquires about her the kids. Saumya tells her that Armaan went to give the money to the kidnappers and the kids are yet to come home. She then asks her to give her phone to Prisha.

Prisha asks Saumya how the kids are now. Saumya tells the kids are yet to return also says if she truly wants to help her also she is not the one who kidnapped the kids then she has to help her and asks here where the wind chime is. Prisha tells her that she dont remember anything so asks her to ask this to Sushma. Saumya gets upset and cuts the call. Goldie tells her if Prisha is the real mastermind behind the kids kidnapping then it’s like alerting her and putting the life of kids in more danger. Saumya pleads Goldie to not to say anything such.

Saumya then tells that she doubts Armaan is behind this conspiracy shocking everyone. Sushma tells Saumya that Armaan loves the kids so much so he will never stoop this low. Saumya tells even her heart doesn’t want to accept this at all. She then breaksdown infront of everyone asking God’ what mistake she has done that lead her to face all these. She begs God to help her to find the kids. Prisha calls Saumya and asks her to check it in store room where she kept things like that.

Saumya gets shocked. She and the family members goes to the Store room. The guy in the Store room tells the kids he is taking them to their father. Before they leave the family members enters the place. The guy takes his gun out and threatens the Oberoi’s. Saumya distracts the hoodie guy. They then goes to the kids. Goldie and Harsh asks him to tell them the truth. The guy tells its Armaan who is behind all this shocking everyone.

Armaan in his hotel room says to himself within few hours he and the kids will leave to Indonesia. He then asks the guy who is converting the Indian rupees into crypto currency how many more minutes will take to finish this process. He tell few more minutes. Armaan smirks and recalls how he receives a call from hir assistant who was with the kids informing him one of the kid have a fever. Armaan scolds him and asks him to take the kids with him. He then calls Amit and tells he is coming to Indonesia to take over his production house. Amit gets happy. The FB ends.

Armaan tells himself that he and his kids will go to Indonesia where his new chapter will start and he dont have to see Saumya’s face. He also thinks that Saumya made a mistake by double crossing him so she is going to regret after seeing what he is capable of doing it. He then hears the door is being knocked. He opens the door and gets shocked seeing Goldie outside. Goldie tells Armaan that he is the one who started all this so his presence is important to end this all. Armaan gets shocked when the cops enters the place.

Precap: Jashan tells Saumya that they want to see their father. Saumya tries to distract them but fails. Harsh tells they are mentally weak so they need Armaan. Saumya looks on worried.