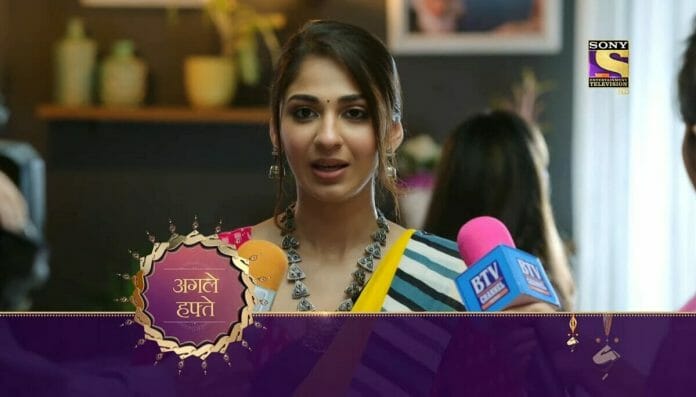 Sony TV’s show Mose Chhal Kiye Jaaye is gearing up with an interesting drama with Saumya determines to turn her kids hatred for her into love to make them accept her as their mother. Later Prisha reveals Anjoori is none other than Saumya to Sushma and the latter gets happy.

In the current track it shown that Armaan signing the contract papers also tearing the divorce papers in which Saumya has signed it.

He then questions Saumya about his skills in knowledge and warns her about the consequences but Saumya reminds him his earlier words against her that she can’t able to do anything yet she proved she can also asks him to put his ego aside and accept that woman can do anything.

Armaan leaves. Saumya tells Goldie that she want her kids to accept her and she dont want to forcibly take them with her. She also vows to make Armaan confess his crimes. Prisha gets shocked learning Saumya is Anjoori.

Armaan tells his plan to use his against Saumya. The next day in school Jashan and Jahan locks Saumya inside the room but the latter tricks them and makes them open the door.

Saumya tells her they are legally connected also her kids connect them and tells that she will fulfill her hatred for Armaan unlike Armaan who fails to fulfill his love for her in this relationship of their’s shocking Prisha.

In the upcoming episode it will be shown that Saumya telling media that Armaan is working under her which will anger Armaan but he will try not to show it. Other side Prisha and the kids will be seen in a waiting area.

Prisha will instruct the kids to trouble Saumya the way she wanted to then she will take them to an amusement park. Jashan and Jahan will agree to Prisha’s deal.