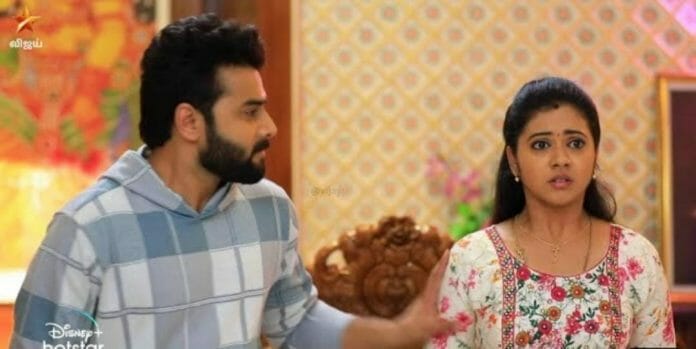 Vijay tv popular show “Mouna Raagam season2” starts after a break with lots of twist and turns. Now serial focuses on Sakthi to reveal the truth

In the previous episode we saw: Sakthi lose her cool when Sruthi hide the truth from Manohar. Sakthi revealed to everyone that Kasthuri was locked in a house for last 15 years.

Sruthi was tensed to hear it. Sakthi revealed that Sheela abducted Kasthuri. Manohar got Furious and lashed out at Sruthi for hide the truth from them. Sruthi managed to lie with him.

Later, Varun tried to control his anger. Sakthi consoled him. Varun and Manohar visited Viswanathan house with police. He demanded them to arrest Sheela. Police arrested her. Later, Tharun lashed out at Sruthi for hide the truth from him. She got furious seeing him being close with Shalini.

In the upcoming episode viewers will see; Karthick and Mallika will give a interview to Media. Sornam will be excited to see their interview. Meanwhile, Shalini will help Kasthuri to massage her head. She will be thankful for her help.

Tharun will suggest Kasthuri to consult doctor but she denied it. Rukmani will notice the interview of Kartick and get furious. Kadhambari will get angry and left from the house taking her luggage. Meanwhile, Shalini will serve food to Tharun and learn about his favourites dishes.

Later, Kadhambari will return to Kartick house and create a scene there. She will be adamant to stay in Karthick’s home.