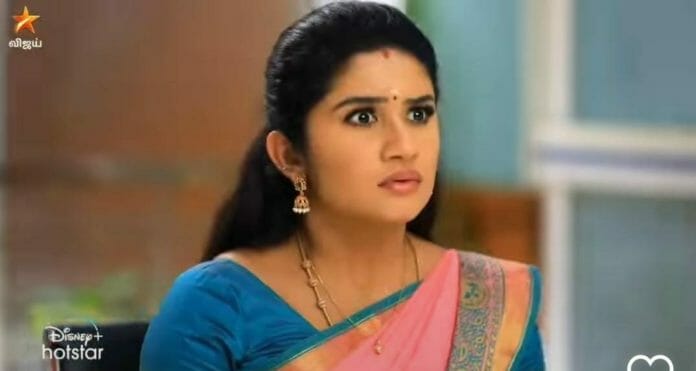 Vijay tv popular show “Mouna Raagam season2” starts after a break with lots of twist and turns. Now serial focusing on Sakthi to learn the truth!

In the previous episode we saw; Sruthi watched the news. She got furious hearing Karthick announced that he doesn’t have any relationship with Kadhambari. He cut all the ties with her. If she dared to visit his house or trouble his family members then he will take legal actions.

Sruthi accused Sakthi for it. She blamed her mom was the reason behind this matter. Sakthi denied it and assured her that she won’t do like that. Varun revealed to her that he gave that idea to him. Because of him he announced like that.

Tharun questioned him why did he done like that? Varun informed to him that Kadhambari strangled Mallika’s neck and troubling them often. Whom will stay quiet? Tharun argued with him.

In the upcoming episode viewers will see; Sakthi will suspect Sheela. She will consult doctor and inquired him about the medicine. He will reveal to Sakthi it’s not the medicine he suggested for Varun.

It’s just a sleeping pills. He will alert her if someone take this medicine then he will die asap. Sakthi will get shock to learn the truth.