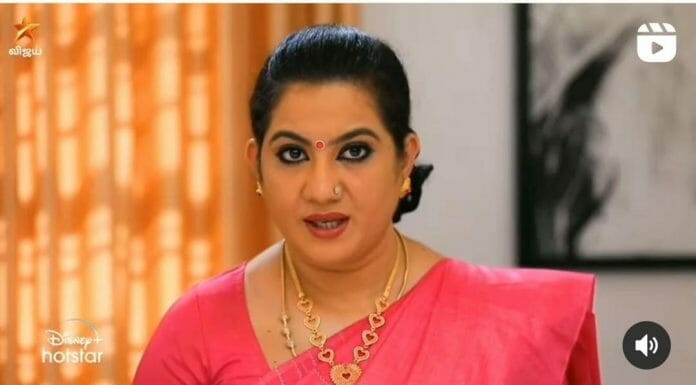 Vijay tv popular show “Mouna Raagam season2” starts after a break with lots of twist and turns. Now serial focuses on Sheela will be in Trouble

In the previous episode we saw: Varun opened up his feelings to Sakthi. But she slept in tired disappointing Varun. Sakthi apologize to Varun next morning for ruined their first night plan. Varun glared at her. Sakthi promised him to never repeat it.

Later, Rukmani learnt from Viswanathan that he planned to kill Varun and Sakthi in Kerala. She shared this to Sheela. Sheela excused them to meet Kasthuri. Rukmani got suspicious on her act and followed her behind. She noticed a strange woman there and left. Later, Goon troubled Sakthi and Varun.

In the upcoming episode viewers will see; Varun and Sakthi will spend a quality time with each other. Varun will notice a goon following them. He will fight with him to find the truth. He will escape from there. Sakthi and Varun will argue with each other over this issue.

Sakthi to apologise to Varun. Later, Rukmani confront Sheela and demand her to confess the truth she hiding from them. Sheela will promise to reveal the truth to her. Later, Varun will caught the goon and learn from him that Viswanathan send him to kill them.

Will Shruthi get caught? Will Sakthi take revenge on Sruthi?