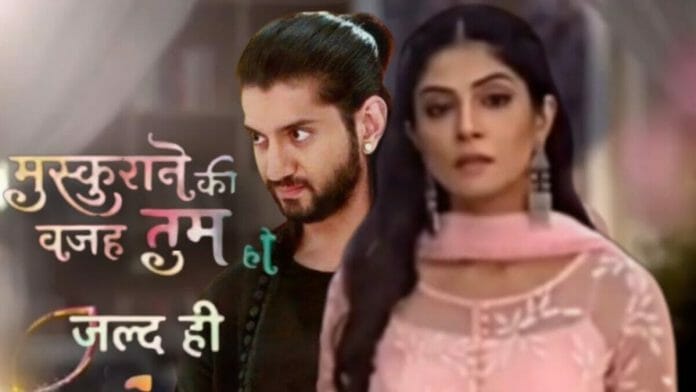 Yuvraj acts as if he doesn’t know anything about her and never visited Nainital. Katha gets angry with his answers. Yash notices something is not good between Katha and Yuvraj. Savitri interrupts them. Kabir sneaks peanut Chikki.

He takes Katha to the room saying his phone is missing and offers it to Katha from everyone’s eyes saying it’s for his baby. Katha says she wants to keep this fast for his wellbeing.

Kabir asks what about their baby. Katha says she will break the fast if Baby has any problem. Kabir kisses her hand and thanks her for thinking about his wellbeing.

Madhu asks Yash why no one is noticing that Katha has some problem. Yash says Yuvraj is not happy with this marriage. He looks so disturbed. Kabir calls Yuvraj and asks him where is he leaving.

Yuvraj tells him he is leaving to distribute the sweets. Kabir asks him to return soon. Yuvraj leaves. Kishore gathers everyone and announces for Dumb shell arts game to divert ladies’ attention from hunger. Manju gives a name to Kishore. He enacts but no one guesses the name. Next, it’s Deepa’s turn.

Bhushan and Tony enter inside with sweet boxes. Katha recognizes them and learns that they are friends of Yuvraj whom he arranged to tease her. Gunjan guesses the name. Yuvraj asks them for the key.

Everyone asks Yuvraj to play with them. Yuvraj denies but Kabir asks him to do it. Yuvraj agrees. Deepa asks Kabir and Katha to play. Katha slips but Kabir holds her. Everyone smiles seeing them. Kishore asks them to play the game. Katha gives name to Kabir.

Kabir enacts. Yuvraj guesses the name that Mei chup nahi rahungi ( I won’t keep quiet). Everyone claps. Yuvraj realizes what she meant. He stands shocked. Katha says he guesses it correctly. He leaves in tension.

Yuvraj meets his friends and tells them that he needs to keep the truth hidden from his family. Katha goes out with Deepa managing everyone. Where she confront Yuvraj if he ever went to Nainital.

He denies. Katha sees her gifted jacket with Bhushan and asks him how he get it as it’s from Nainital. Bhushan reveals he got it from Yuvraj. Deepa asks how he gets it. Yuvraj manages to say he ordered it online. Manju calls them for pooja so they go inside.

Guests praise Katha’s beauty. They get surprised to see the arrangements done by Savitri for her daughter in law. They asks what Katha’s family sent for her Teej. Madhu and her aunt mock Katha’s financial status and say she didn’t her anything.

That time Uma and Manu come there with a gift. Katha cries hugging her mother. Uma reveals the clay Shiv Parvati idol she prepared with her hands. Madhu mocks her. Savitri stops Madhu and tells everyone that it reminds her mother in law who made idol like Uma for her Teej. Savitri happily accepts it.

In the room, Uma asks Katha why she looks gloomy. Katha didn’t reveal the actual reason. Yuvraj comes there. Uma meets him. He tells Katha that Kabir is calling her. She goes out and notices there is no Kabir.

Yuvraj tells her he lied to talk with her. He apologizes to Katha. She refuses to forgive him and tells him that he deserves to get punishment for the sins he committed. Yuvraj says I have apologized and it’s done so don’t drag it.

Kabir asks Yuvraj what apology. Yuvraj manages to say it’s about mandap. Kabir asks him to forget the matter. Kabir takes Katha. They perform puja. He breaks her fast.

Katha says I know that you’re fasting. Kabir asks if she is spying on him. Katha says no need to spy on you as you’re open book. Yuvraj gets angry and leaves. Uma and Manu leave for the airport.

At the dining table, Yuvraj gets angry recalling Katha’s words that she makes him get punishment for cheating on her. Katha sees Yuvraj worry.

She asks why he looks lost. Your brother said you will be the attraction at every function. Is something bothering you? Yuvraj coughs. He leaves telling he is not hungry. Savitri tries to stop him but he doesn’t listen.

On the video call, Tony asks Yuvraj to apologize to Katha with fake tears as you don’t have any other way. Someone knocks on the door. Yuvraj cuts the call. He opens the door. He sees Katha.

Katha comes there with food. She tells food is just a reason to meet you and you know why I came here. Yuvraj sits on his knees and apologizes to her. He asks her to end this topic so they can start the relationship as Dewar and Bhabhi.

Katha asks him to tell her why he cheated on her by playing with her emotions and trust and what wrong she did with him. Yuvraj asks her to not shout and tells her it’s because of his bet with a friend.

Katha says you ruined my life for a bet. She asks if he won the bet. She says you may be partied with your friends leaving me in tears. Yuvraj asks her to give him a chance to explain. Katha pushes him and warns him to stay away.

In the upcoming episodes, viewers will witness Yuvraj will say to Katha, it was a mistake and you aren’t pregnant. Katha will get shocked and slaps Yuvraj. Furthermore, she will warn Yuvraj to confess his wrongdoing in front of his family.

She gives 48hrs to tell truth to Kabir and other family members. She will start the timer and tells him that his time starts now. Yuvraj will stand shocked.