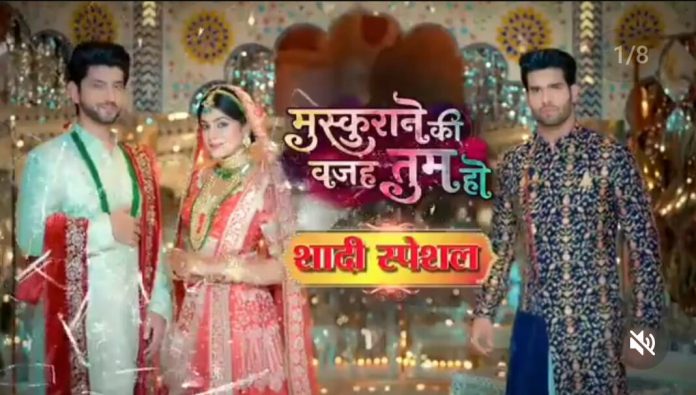 Katha says you respect people with whom you have relationships. Yuvraj says not in that way. Katha asks why he is apologising. Yuvraj says he is sorry for whatever he did with her. He asks her to move on forgiving him. Katha says you killed your mom and lied about your family to trap me and you played with my emotions.

She asks him to tell if he forgives himself if he is in her place. Yuvraj says he can forgive if he is in her place. He asks her to not drag the matter and requests her to end it. Katha claps and says your heart is big to forgive but I can’t do it and you have lied and have done so many mistakes and I will punish you for all the sin Yuvraj says I have apologised and it’s done so don’t drag it. Kabir asks Yuvraj what apology. Yuvraj and Katha get tensed.

Kabir asks Yuvraj why he is apologizing to Katha. Yuvraj says it’s about mandap. Kabir asks him to forget the matter. Katha says she is also saying the same. Kabir asks him to leave the matter. He tells Katha that it’s time for pooja. He notices Yuvraj is lost. He calls Yuvraj to come. Katha, Kabir, and other couples perform pooja to Shiv Parvati and Ganesh idol. Katha prays Parvati maa for Kabir’s wellbeing. She tells Parvati that she will make Yuvraj get punished.

Ladies give Aarti to the moon than to their husbands. Katha is about to hold his feet. Kabir says they are equal in the relationship and he tells her he will hold her feet if she holds his feet. Katha smiles. Kabir makes him drink water. Katha says I know that you’re fasting. Kabir asks if she is spying on him. Katha says no need to spy on you as you’re open book. Yuvraj gets angry and leaves.

Manyata calls him but he leaves. Yash notices it. Katha asks her mom to stay. Uma says your sasural people will mock you if we stay here. Everyone smiles. Uma asks everyone to eat something. Savitri takes other family members. Uma blesses Kabir. Kabir tells Uma that driver will drop them at the airport. Uma agrees. Kabir leaves. Katha hugs her mother and sister.

At the dining table, Kishore asks Manju to serve quickly. and Ravi teases his wife. Kabir waits for Katha. Katha comes there. Kabir serves food to Katha. Yuvraj gets angry recalling Katha’s words that she makes him get punishment for cheating on her.

Katha sees Yuvraj worry. She asks why he looks lost. Your brother said you will be the attraction in every function. Is something bothering you? Yuvraj coughs. He leaves telling he is not hungry. Savitri tries to stop him but he doesn’t listen. Yash says seems like he doesn’t like Katha teasing him. Katha asks where is Yuvraj’s room.

On the video call, Tony asks Yuvraj to apologize to Katha with fake tears as you don’t have any other way. Someone knocks on the door. Yuvraj cuts the call. He opens the door. He sees Katha. Katha comes there with food. She tells food is just a reason to meet you and you know why I came here. Yuvraj sits in his knees and apologises to her. He asks her to end this topic so they can start the relationship as Dewar and Bhabhi. He says I held your feet and apologized to you and what more I can do?

Katha asks him to tell why he cheated on her by playing with her emotions and trust and what wrong she did with him. Yuvraj asks her to not shout and tells her it’s because of his bet with a friend. Katha says you ruined my life for a bet. She asks if he won the bet. She says you may be partied with your friends leaving me in tears. Yuvraj asks her to give him a chance to explain. Katha pushes him and warns him to stay away.

The episode starts with Gunjan getting angry seeing Katha. She pushes the swing harshly and hides. Katha is about to fall but Kabir saves her in time. He asks if she is fine. Katha nods Yes. He asks if his baby is fine. Katha tells they are fine. Kabir asks how swing loved suddenly. Katha says it’s like someone pushed the swing and I felt scared thinking something might happen to the baby. Kabir tells her he won’t let anything happens to their baby. Gunjan feels disappointed.

Bhushan asks Yuvraj to drive slowly. Yuvraj scolds him for wearing the jacket and telling Katha that he gifted him. Tony says everyone can’t lie like you and he may tell what comes to mind. Yuvraj says he is not seeing any way to escape from this problem. Tony says there is one way. Bhushan pleads him to drive slowly.

Katha asks if he is planning to be with her like a bodyguard. Kabir says he needs a situation to be with her. Katha looks impressed. He holds her hand while moving the swing. Both lost in eachother. Kabir’s niece tells him that she wants to dance with them. Kabir takes Katha. He thanks everyone for welcoming Katha with so much love. Savitri asks isn’t she Gadha? Kabir reveals how Pandit asked them to use Gadha. Savitri says she accepts her daughter in law in all forms. Kabir dances with Katha and makes her feel special. Gunjan gets angry seeing them. she leaves. Madhu notices it. She follows Gunjan and asks her what happened. Gunjan leaves telling her she is feeling bad in some matter.