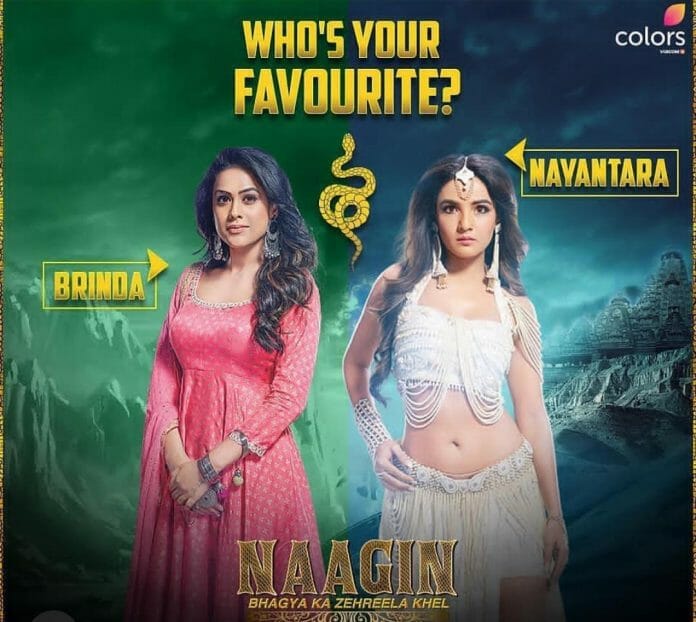 The episode starts with Dev trying to get out of the room with Brinda but the door is locked from outside. Nayantara is on the other side of the door and smirls thinking that the door won’t open. Dev tries opening the door in vain. Brinda mummers that she wants to go home. Nayantara thinks that they can romance how much they want whole the night and the next morning will be a dark one for them. He picks her in his arms and places her on the sofa. Brinda’s head falls on Dev’s chest. He looks at her and recalls their moments. “Ranjhana mere yaar ve” song plays.

Brinda asks for water and Dev finds a bottle near them. He makes her drink the water and some of it fall on her face so he wipes it. Nayantara says that he shouldn’t have come there and lips “Maa” and Rajat’s name. Dev recalls Rajat misbehaving with Nayantara and saying. He says that Rajat is fully drunk and she is continuosly thinking about him only. He says that he feels that Rajat is very greedy since he keeps talking about money. Brinda keeps saying that she shouldn’t have come there and that she wants to go home. Rajat thinks to call Nayantara but there is no network. He says that Rohan and others must come. Brinda holds Dev’s hand. He makes her lie on the sofa and then goes to try opening the door and calling out for Rohan and his cousins but in vain.

Brinda falls on the ground. Dev immediately rushes to her and takes her in his lap asking if she got hurt. Brinda cries saying she wants to go home. Dev calms her down and she falls asleep in his arms. Dev recalls their moments together while “Ranjhana” plays.
The next morning reporters enter in the room and click Dev and Brinda’s picture while they are sleeping in each other’s arms on the ground. Dev wakes up and asks the reporters to leave. Brinda wakes up too and gets scared. She hides behind Dev who pushes away the reporters.

Vrushali, Akash, Baa and Ketki watch all this on television. Vrushali bashes Brinda and wonders if she should blame Brinda or her own son Dev. Just then Nayantara comes and asks Vrushali not to scold Dev who is a very nice and innocent guy and adds that she doesn’t want to come between two lovers. Vrushali says that Dev doesn’t love Brinda at which Nayantara replies that she is not sure if Dev likes her even though she likes him and has imagined her life with him. Vrushali says that she will become her daughter in law only. Baa says that maybe Nayantara is right and Dev likes Brinda not her. Vrushali asks Baa to leave because she is Dev’s mother and knows her son better.

Akash takes Baa away. Vrushali asks Ketki to leave too. Vrushali and Nayantara are left alone and Vrushali convinces Nayantara that Dev will marry her only and as a proof she makes Nayantara wear a shagun ka kangan. Nayantara asks her what she will answer to her mother who will want the wedding to happen as soon as possible after watching such a news in order to shut people’s mouth. Vrushali asks her to ask her mother to get ready to welcome the baraat. Nayantara smirks.

Dev and Brinda comes back home. Dev tries explaining Brinda what happened last night when whole the family comes out. Vrushali bashes Brinda. Swara comes and defends her daughter but Vrushali doesn’t listen to her. Even Rajat blames Brinda of betraying him and Brinda gets shocked. Everybody leaves. Vrushali takes Dev inside. Swara asks Brinda to follow Rajat and talk to him.

Rohan, Sparsh, Harsh and Hardik enter in Manas’ room. He is lying on bed still in coma. Sparsh curses Brinda. Suddenly Manas opens his eyes and they rush to call the family.

Dev stands in front of the temple and gets a reporter’s call. He cuts it telling her to publicize whatever they want as he doesn’t care. Brinda comes there. Dev tells Brinda that his family wants him to marry Nayantara and asks her what she would have done on her place. Brinda says she would have done what is right for her family and the only way is marrying Nayantara. Dev says he should marry her then and asks her to leave Rajat who is not right for her since he doubted her. They argue but just then Akash comes to call Dev since Manas got conscious. He asks Brinda not to come or his family will again bash Dev. The latter looks at Brinda and then follows Akash inside.

Everybody is in Manas’ room and Vrushali asks Manas who harmed him. Nayantara enters in the room and Manas sees her. He recalls Nayantara saying that she knows that Naagin which attacked him and indicates her with a finger. Nobody gets what he wants to say though and Ketki asks Nayantara to come and sit next to Manas as he is calling her. Nayantara sits near him. Dev goes to call the doctor. The family asks Manas what happened with him since they are sure it wasn’t an accident or suicide. Manas slowly says “saanp” (snake). Parikh family gets shocked.

On the other hand Swara and Brinda’s father cry because of the way Parikhs were bashing their daughter. Brinda comes and asks them not to cry and trust her because she cannot do anything wrong. Swara says that she trusts her but she never listened to her when she asked her not to go to Parikhs continuosly.

Brinda says that she can’t clearly remember what happened, she just remembers that she needed to talk with her father. He says that she doesn’t need to justify in front of them since they trust her but it’s the world that is pointing a finger on her. Swara cries and asks Brinda to go to Rajat and apologize. Brinda is about to leave when Vrushali comes and says that she wants to talk alone with Pandit Ji.

Brinda goes out and wonders if Dev was right about Rajat but then thinks that anybody would have misunderstood watching the news. She wonders with whom she should talk about what is happening to her. Just then Manyeta walks behind Brinda but both don’t notice each other.

Manyeta goes to Nayantara and asks her to step back from the wedding as they need to change their plans. She leaves and Nayantara is about to follow her when Brinda bumps into her. Brinda and Manyeta look at each other. Brinda thinks that she must be Nayantara’s mother. Nayantara asks Brinda to move away.

Meanwhile Vrushali shows Manas a picture of Keshav and Manyeta given by Pandit Ji and he gets scared recognizing Manyeta as the Naagin that attacked him. He gets agitated and falls unconscious again. The doctor comes and visits him. Vrushali thinks that her fear was right: the Naagin is alive and has come back to take revenge from them. She recalls Manyeta cursing them before jumling in the water and thinks that her next target will be Dev.
Dev asks Baa not to worry about Manas and take rest.

Brinda tries talking to Rajat but he refuses to listen to her and blames her for betraying him behind his back when they had to unite Nayantara and Dev instead. He asks her what is between her and Dev. Brinda gets hurt and cries. She asks her what should she say to convince him that nothing happened. He says that he won’t forgive her and leaves.

Vrushali comes out and drops Manyeta’s picture on the ground. Brinda picks it up and gives it back to Vrushali and asks her if also this woman in the picture is upset with her for what happened last night and if it’s so she will talk to Nayantara and solve everything. She reveals to a confused Vrushali that the woman in picture is Nayantara’s mother. Vrushali is shocked and understands Nayantara and Manyeta’s plan.
Episode ends

Precap: Brinda comes in the temple where she sees Manyeta as Naagin swearing to destroy Parikh family with her hatred. Brinda transforms into Naagin too. Manyeta sees her. Later Manyeta and Brinda does Naagin dance together.