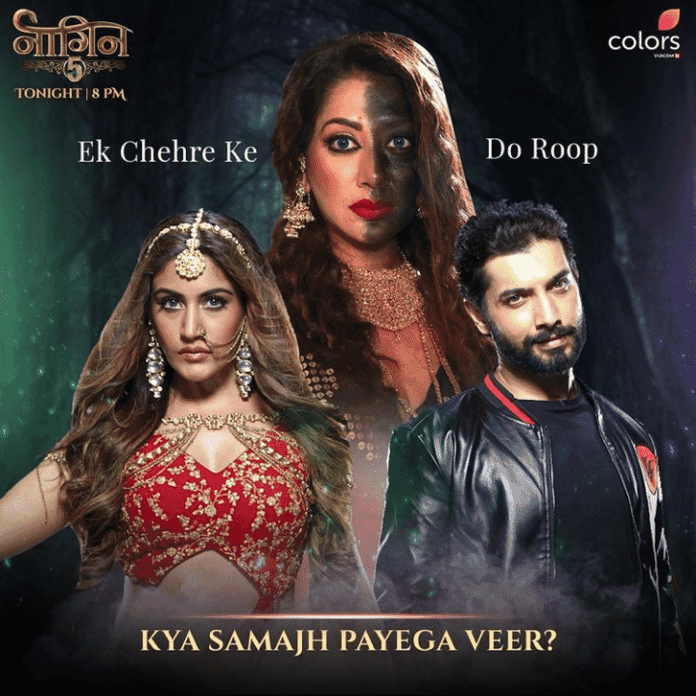 The episode begins with Pandityan shocks knowing Jay’s secret. He kills her and says he likes to kill someone but he can’t lose against anyone and wonders where to hide her body. The strange guy asks Bani to remember him saying she knows him and tells her to remember what happened in her past birth. She recalls Nageshwari and Eagle’s fight and asks where he was in the past. She realizes that he saved her once and asks how he suddenly came here and how he saved her in past. He asks her to go with him. She refuses to go with him saying without knowing about him she can’t go with him but he takes her to the hall and starts to dance.

She says she knows that what she is doing and says she even killed her enemies and won’t leave anyone else also. He says she is making excuses now and she is ignoring the crimes done by those eagles. She says she didn’t forget what happened. He says she speaks a lot but doesn’t understand anything and she won’t even know that what’s happening behind her back.

Bani reaches Temple and asks Baba about Pandityan. He says she didn’t return yet. She asks him to help her. He says he can’t help her and leaves from there. She asks Shivji that she is not understanding why she is not getting answers for her any of the questions. One Pandit comes there and tells her to find the answer within herself and tells her to question her heart. She says she feels she is not wrong. He blesses her saying then she is not wrong and she leaves from there. He then changes into Shivji.

Bani sees Veer and recalls Angel’s words. He asks where she went without informing him and says he was tensed not seeing her in the house. She says she finally found her way and asks him to hug her. He hugs her and she hugs him back tightly (Pal song plays in the background). He says the first time she herself asked him to hug her and was about to break the hug but she doesn’t let him do that. He gets surprised with her behaviour and says time should not pass and wants to stay like this forever. He says she already knows this still he wants to tell her again and says he loves her so much.

He asks her to say something. She says she doesn’t want to get any revenge on him and says if she says everything today then he can’t handle it. He says the first time she asked him to hug her and if said three magical words too then he really can’t handle it. She teasingly says she is saving him.

Later Angel shocks knowing no one is in the house except Bani. He says her family is safe now but until they get their punishment she has to tolerate the pain and leaves from there. She gets confused thinking about what he meant. The next day, Meher and Keher thank Bani for sending them to the farmhouse because they enjoyed it there. Veer comes there and tells Taapish that he enjoyed a lot yesterday. Veer doesn’t remember Bani and asks who is Bani.

Angel sees that and says his curse working. Veer assumes Bani as a maid and tells her to bring coffee instead of staring at him. He drags her to the kitchen and tells her to make coffee for him. Bani realizes that Angel is behind that. Balwant got to know that Veer doesn’t remember Bani. Bani tells Veer that he knows her and asks him to remember.