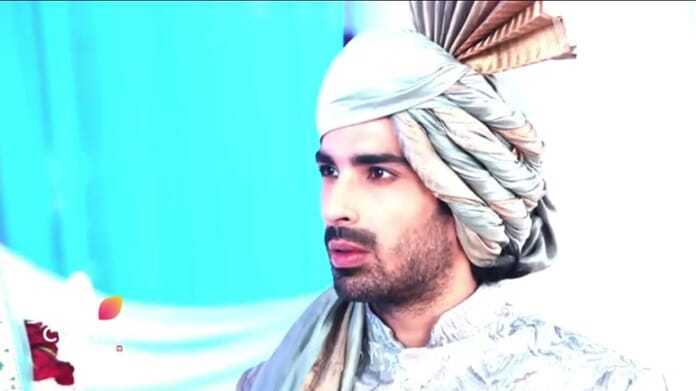 The episode begins with Bani says she will get to know what’s happening with Veer and will find a solution for his problem too. He tells her to not do anything. She says she even brought gift for him but she will give it to him once he gets fine. He says he doesn’t remember what all he said to her when he was hypnotized and apologize to her if he hurt her during that time.

Veer says he wants to accompany Taapish to the office. Taapish says Veer should take rest now and goes inside to take some documents. Veer waits near the car for Taapish. Few guys come there and make fun of Veer and talk about Bani too. Veer gets angry and tries to beat them but fails to do and those guys beat Veer. Bani tells Meera that Jay is behind yesterday’s attack and says she should not have believed Jay again. Ponky tells Bani that Veer going to the office with Taapish and Daksh.

Bani comes out and helps Veer to stand. They push Bani. Bani’s eye color changes and she was about to change into a snake but Veer stops her. She just uses her strength and warns them to not come here again. Those guys say today Bani saved Veer but not again and leaves from there. She says he doesn’t trust her that’s why he is not telling her that what’s happening with him.

Veer tells Taapish that their business rivals came but he could not able to do anything. Bani asks Veer to let her help him. He says she can’t do anything because he lost all his powers already. She makes him sit and applies ointment on his wounds. Bani realizes that Veer has a fever and goes out to search Jay after messaging Meera to take care of Veer in her absence. The next day, Veer wakes up and asks about Bani to Meera.

Meera says Bani feels Jay is responsible for Veer’s condition so she went to find him. She tells him to take a rest and says Bani will handle Jay. He curses Jay. Bani finds Jay and attacks him saying he betrayed her again. Jay says he was just helping her because Maarkat escaped from the trap. Jay and Bani go to that place and sees Maarkat is missing there. Jay says it’s Maarkat who sends that creepy crawlies not him. She refuses to believe him.

They reach the house and search for Veer. Balwant says Veer went to the office and says he doesn’t have much time. Bani says she won’t let anything happen to Veer. She asks Jay how to save Veer. Jay says Maarkat is responsible for Veer’s condition so she may know the solution. Taapish goes to the meeting and tells Veer to wait outside. Parikh brothera again beats Veer. Jay tells Bani that he tried to stop Maarkat when she was escaping but she left from there.

Jay and Bani try to find Maarkat in the jungle. Jay says everything happens in a reverse way in this jungle. She decides to call Pandityan to find the solution to Veer’s problem. Jay stops her and says Maarkat said she doesn’t care about anyone and Veer won’t get that water. Bani says they have to find a place where they can get that water because that water will help Veer to get his powers back. Taapish and Daksh try to rescue Veer from Parikh brothers but get trapped by them. Bani finds the place where she can get that water which can return Veer’s powers. She gets that water with Jay’s help.

Precap – Bani tells Veer that he was right about Jay then she bites Jay saying he betrayed her.