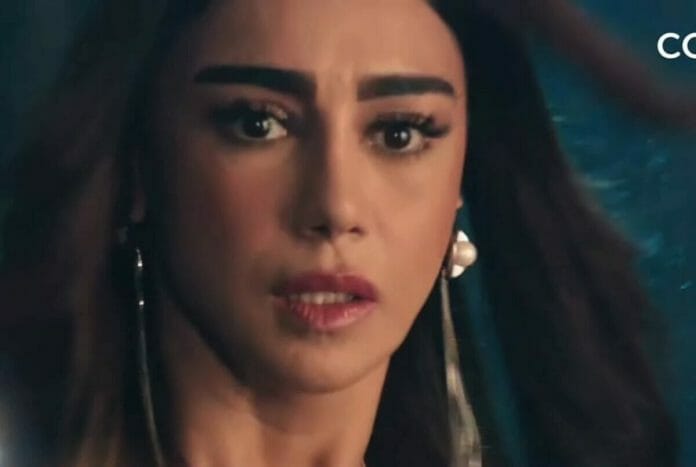 Color TV popular show Naagin 6 is witnessing an interesting track where Pratha begins to take her revenge.
As reported earlier, Pratha kills the doctor who helped Mehek to kill her baby. Urvashi asks Mehek to get ready to meet Shakti otherwise he will come out which will create new problems. Rajesh calls Urvashi and asks her to come near the factory the next day to meet him. Urvashi agrees. She sends Mehek to get ready. She calls Rehan and tells him that she is taking him with her and asks him to manage Divya. He agrees. Rhea tells him she is with him against her mom’s wish and asks him to not cheat her. Rehan agrees.
Vihan lost money in cricket betting and he couldn’t pay the amount. Vihan calls Rehan for help. Rehan asks Rhea if she has money. Rhea denies. Rehan drops her telling her he is going to help his brother. He thinks to trap Rajesh’s sister Divya leaving Rhea who won’t help him. Pratha spies on Vihan. She catches Vihan like Samaira. He gets scared.

Pratha throws him at Rehan’s car. Rehan comes out of his car and asks if he is fine. Vivan says naagin and Samaira. Rehan says you’re drunk and don’t worry about the payment as I will trap Rajesh’s sister and get money. Pratha hears his plan.
Mehek goes to meet Shakti in lehenga. Shakti hugs her telling her he wants whom Rishabh loves. Mehek tells him Pratha is the girl Rishabh likes and I used you to separate Pratha from him. Shakti asks where is she. Mehek says she is dead. Shakti says you did well and he tells he forgave her.
Mehek and Urvashi go to meet Rajesh Pratap Singh at his company. He tells them he gifted the land to his fiancee as an engagement gift. Pratha says she can’t give them as she is planning to make it scatting place. Urvashi says she can arrange another land for her and tells her that they can do anything for the land.

Pratha says she will think and asks them to take her for hunting to finalize the deal. Mehek agrees to take her in the next day.
Rishabh sees Kiara’s photo and thinks about why he feels she is Pratha. Mehek comes there and scolds him for checking Kiara. She says you still love that Pratha. Rishabh says he hates Pratha for whatever she did to him and I’m checking if Kiara is Pratha so I can punish her. Mehek says she has a way and tells him to take Kiara to hunt and you will find out whether she is Pratha or not if you closely observe her moments.

She asks him to not lose the golden chance. He looks on and leaves. Urvashi goes inside and hugs Mehek for her successful move. They recall how they made Rishabh against Pratha by showing him that Pratha has an affair with Vijay.
In the upcoming episode, viewers are going to witness Rishabh and Rajesh will go hunting with Mehek and Pratha. Rishabh will make Pratha learn how to shoot. His closeness will affect Pratha and she thinks about what’s happening to her.

Mehek will implement her trap in the hunting by leaving the animal which will attack Rishabh and Pratha. Pratha will change herself to Shesh Naagin. Mehek will get shocked seeing her.

Will Pratha get successful in taking revenge on her foes? What’s the next move for Mehek?