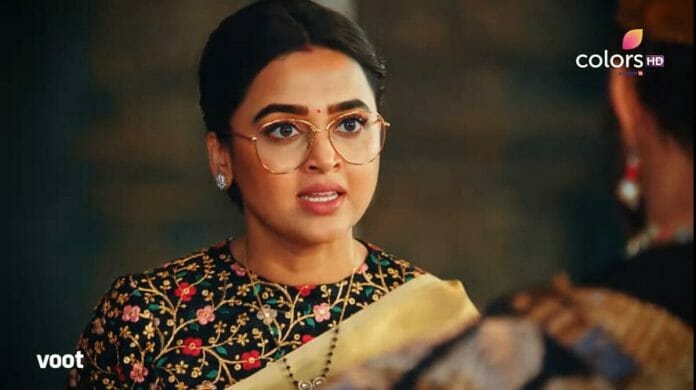 As reported earlier, After 21 years Pratha and Rishabh celebrate Anmol’s birthday. Anmol waits for Rudra’s call. She sees a big snake and feels scared. Everyone rushes to her room. Anmol tells them she saw a big snake. Pratha notices the shadow and sends them downstairs.

She goes upstairs and thinks about who called her. She says Farishta. Farishta comes there. Pratha asks why he called her and tells him that she never used her powers in all these 21 years.

Farishta says you’re showing you’re getting old by wearing spectacle but Naagin won’t get old and you have to come to give naagmani to your daughter as she is turning 21. Pratha denies coming. Farishta insists on her. Pratha changes to her snake form. Farishta smiles and leaves asking her to come.

Professor and Prarthana step down from the bus. Jeet celebrates Prarthana’s birthday in a cafe with a bun. Lady shouts to save her son from the snake. Prathana rushes to the boy and saves him from the snake.

Snake leaves seeing Prathatana. Prathana’s face gets revealed and she looks like a replica of Pratha. Professor thinks hope whatever I see is not true. He goes to Prarthana and asks if she is fine. Prarthana in a stammering role tells him she is fine.

Anmol waits for Rudra’s call impatiently and she rejects other people’s calls. Pratha encourages Anmol. Rishabh warns Pratha to not encourage Anmol’s feelings. Prarthana cleans the new house they shifted to. Prarthana knocks on the door.

Jeet opens the door and takes Aarti. She asks what he always does in the closed room and she complains that she is doing all work. Professor Jeet apologizes to her and asks her what she wants. Prarthana asks him to take her shopping. Professor agrees.

At the market, The professor notices Prarthana is buying cheap things. He gifts her a pen. Prarthana tells him it’s the best gift. Then they enjoy chole bhature. Giant flying bugs come to that place and attack the people. People leave the place in fear. Prarthana and Jeet notice it. One boy falls to the ground.

Prarthana rushes to help him. She notices the car is about to hit the boy then she stops the car by touching it with her hand. Prarthana thinks about how it happened with her touch.

Jeet notices it in shock. The guy who comes to that place in his car saves the boy. He sees Prarthana. Prarthana also notices her.

Will Pratha be able to change destiny? Will Pratha meet her daughter?