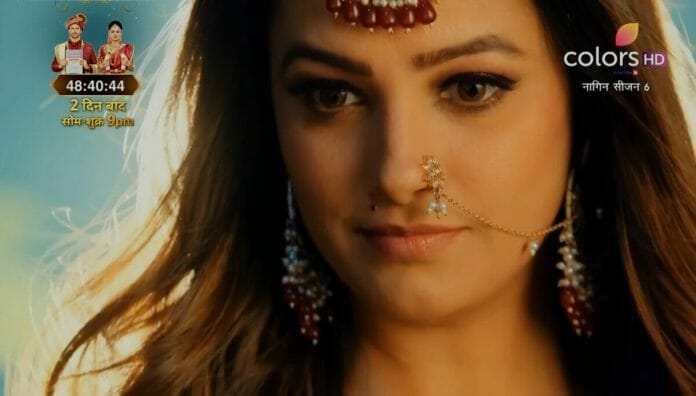 Color TV popular show Naagin 6 is witnessing an interesting track where Vish joins hands with Mehek.
As reported earlier Prathna summons her 9germs to Maha Nagas and she asks 9 planets to bless them. While she is busy in puja Vasuki’s mani gets stolen without her knowledge.

Mysterious Naagin takes that mani near the door of prison which helps Vishaka to get released from prison then Vishaka rejuvenates Mehek and teams up with her.

In the room, Prathna collides with Raghu. They lost in each other Raghu tells her he respects her decision about their relationship and tells her that she can take the decision that she wants. Prathna agrees and leaves the room. Prathna thinks about Raghu’s words. Shesha goes to Prathna and asks her to give one chance to Raghu.

Prathna says she was born to help people not to love someone and I need to tell my reality to Raghu. Mehek meets Seema along with Vishaka. Seema gets shocked seeing them. She asks Mehek to trust her and says she will help her to get anklets. Vishaka says it’s a waste to take Seema’s help as she is an old lady.

Seema argues with her. Mehek stops Vishaka and tells her that they can’t enter the house because of Prathna so we need Seema’s help. Seema says glad you understand my importance. She says she will get the anklets.

The next day, Vinay says to family members no one knows about Mehek. Sonia asks him to not worry and says she will return. Vinay says today is a function so she has to return as I’m worried about arrangements.

Gautham asks Vinay to not worry and says Prathna will arrange everything for the party. Prathna agrees and says she will take Shesha’s help. Vinay thanks them.

Shesha says to Prathna she is fulfilling her responsibilities. Prathna says it’s a matter of tonight’s party and I will tell my truth to Raghu then it’s up to him what he decides and if he accepts my reality then I will accept him.

Shesha says he will accept you as I saw immense love for you in his eyes. Seema tries to find Anklet’s location.

In the upcoming episode, viewers are going to witness Prathna will tell Shesha that she decides to give chance to her marriage with Raghu. She accepts Raghu as her husband. Raghu hugs her in happiness. Later Prathna comes across Vishaka and questions who’s she.

Vishaka says she is Vish and attacks her. They fight with each other.

Will Vish and Mehek defeat Prathna? What happens when Prathna crosses paths with Vish?
All these questions will be answered in the upcoming episodes.