Episode starts with Phanidra asks what Nagini found about Bhairavi. Nagini says my doubt is proved correct because Bhairavi is saying she didn’t know what happened and I believe her. Phanidra says culprits never accept their mistake and she told you lie and you believed that lie and making me believe it.

Nagini says Bhairavi is not important to her than him. Phanidra says Nagini is trying to save Bhairavi because once she saved her. Nagini says I’m thankful to her but I never forgot my responsibilities and how will you think that I lie to you? Bhairavi said she will know what happened through someone and I felt she is saying truth because of her attitude. Phanidra asks her to know the remaining truth too.

NagArjun thinks how he is dreaming about Bhairavi in smile and he thinks he never saw Bhairavi kind of girl who is different that’s why I’m unable to forget her. NagArjun sees Bhairavi call and thinks it’s just his imagination like before. His atta came to room and asks him to attend it after giving him coffee.

NagArjun thinks so it’s real and attends the call. He pinches to believe that it’s Bhairavi voice than he says thank you for calling me and how’s everyone. Bhairavi says everyone is fine so tell me what you want to tell me while leaving. NagArjun says I want to tell you what happened on that day. Bhairavi asks him to explain it. NagArjun explains everything about that day, how he saved her from Tantrick. Bhairavi immediately cuts call thanking him. NagArjun thinks these ladies will never answer boys questions, they only need answers.

Zarina asks what happened than Bhairavi explains them everything. Veerabhadram comes to them and asks what happened. Bhairavi tell him that she didn’t went to temple in her own senses and it’s happened because of that Tantrick so tell me who will do black magic in our area. Veerabhadram says he is scared of those people and says that he don’t know anything and asks her to won’t believe it. Bhairavi says some people are their so try to found these persons details. Veerabhadram agrees but scares thinking Bhairavi might caught him.

Veerabhadram meets Tantrick and informs him that Bhairavi is getting to know that you’re the one who send her to temple. Tantrick smiles and asks Veerabhadram to don’t worry saying she didn’t found its me so stay cool. Veerabhadram says Bhairavi may get to know it from someone about us than our life is over. Tantrick says it’s good if she comes here because it’s like she is coming to our trap so bring Bhairavi to here and tell him some plan. Veerabhadram happily agrees and goes to get Bhairavi.

NagArjun again gets same dream that Snake is biting him and he wokes up from sleep. Sam and his Mother goes to his room and asks what happened to him. NagArjun says he again got the same dream with snake. Shakuntala says it’s sign of some bad if Snake comes in our dream, you didn’t get dreams after wearing bracelet but these dreams are coming to you again once you’re coming from Nagavaram. Sam asks her Mom to relax saying it’s normal dreams. Shakuntala says it’s indicating that he have Pranagandam and she cries for her son. NagArjun assures her saying nothing will happen to him. Sam says  don’t worry, I will make Arjun goes to meet dream analyst than we can know about those dreams. 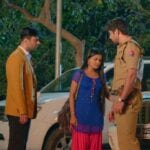