The episode starts with Maha hearing music Mayan shouts like fortune teller. Maha thinks how come fortune teller shouts in morning itself? Mayan pretends like saying future incidents Maha notices him and questions him why is he here? She asks him to lower his voice reasoning her dad is inside. Mayan says to her he knew well her dad went to market and mom went to meet relation. Maha questions him Is he watching her 24 hours? Maha says to her he don’t need anyone permission to meet her. He questions her why didn’t she attend his phone call? Maha informs to him that her dad was near her always that’s why.

Mayan says to her he wanna update one news to her. Maha questions him Is Muthuraj died? Mayan questions her why is she asking like this out of blue? Maha says she said it mistakenly. Mayan informs to her that Muthuraj is missing for two days Vadivu created a scene in that house. But Muthuraj’s phone is there. Maha nods to everything and talking with him casually. Mayan questions her why is not giving expression? She says everything happening for good.

Maha says may be Mayan threatened him for Aishu ‘s safety. Mayan deny it. Mayan says to her he is doubting Maha because she is not giving any shock reaction at all. Maha says she shooted Muthraj and places the letter and mobile in the house. Mayan says that he didn’t mentions about that letter how comes she say it. Maha says don’t think much she hears it from someone. Mayan asks Maha to shoe where is gun? She informs to him that it’s safe here. Mayan says that he fears someone from his family connected with this missing matter.

Maha gets a phone call. She informs to him that dad is coming back. Mayan gives a kiss to her and leaves from there. Nachiyar is thinking about the matter. Chidambaram asks Nachiyar to stop thinking about it. Vadivu comes there and glares him. She says that Chidambaram is not giving heed to anything. She went to meet the person whom will help her.

Chidambaram says to her that he will return to home he is not a kid to worry this much. Muthuraj didn’t done a good thing to return soon here. Vadivu says that he doesn’t care about his own son like the way he is taking care of Nachiyar’s kids. He says to her that he will talk with him. Vadivu asks him to find Muthuraj soon she fears something bad happen to him. Even Maasani has no idea about his where about?

Vadivu asks Chidambaram to help her to find Muthuraj. Chidambaram asks her to stay calm he will search for him. Vadivu complaints that someone from this house harmed her son. Chidambaram says to Nachiyar ignores this. He fears something bad happens to Muthuraj too.

He loves his son too he don’t like his way of behaviour that’s why he was strict to Muthuraj. He is earning everything for him too. He knew well that Muthuraj done many mistakes too Aishu. Chidambaram pleads with Nachiyar to ask her to talk with Mayan and inform him where is Muthuraj? He will send Muthuraj to somewhere far from here. Aishu starts blabbering in sleep. Nachiyar hears Aishu’s sound. Nachiyar and Saranya rushes to Aishu’s room and tries to console her. Aishu gets panic attack there. Kathi says to Gayathri that Muthuraj is torturing her in dreams too.

Aishu cries and blabbers to her. She apologies to her in guilty. Nachiyar trying to console her. Saranya is advising to Aishu and asks her to stop crying. Aishu pleads Nachiyar to stay with her and asks her to don’t leave her. She assures to her. Aishu lays on her lap and cries. Nachiyar gets angry on Muthuraj for seeing Aishu’s state. Nachiyar makes Aishu sleep in her lap.

Udaariyan: Jasmine to insult Gippi and his family? 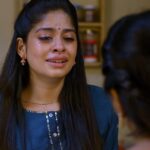 Anu to confess her love for Surya to Pushpa