The episode starts with Vadivu questions Muthuraj where is her daughter in law? He informs to her that he lost her in temple function. She asks him to stop joking. Muthuraj says to her that Aishu felt bored travelling in car so she is walking back to home. He leaves from there. Vadivu tries to manage the situation with Nachiyar and leaves from there. Saranya asks Nachiyar to go and sleep. She refuses to go back. Saranya says to her she will call Aishu. But her phone is not reachable. Just then Aishu comes there. Saranya keeps questioning her why did she late? Why don’t she pick the call. Aishu go inside without answering to them. Mayan comes there and informs to them that he will answer to them. He says to them that Muthuraj left her alone in middle of road. She dialed to Saranya and her mom but none take the call. She finally called him. He went to take her but she refuses to get in his bike. Muthuraj asked her to walk back to home. She is giving too much respect to her husband words and walked back. Without option he too followed her. Mayan asks Nachiyar to talk with Muthuraj. She deny it reasoning she don’t care. Mayan complaints if she don’t care about her then she wouldn’t have sit here and wait for her. He adds that already she cuts her ties with Gayathri don’t do it in Aishu matters also. He don’t know whether Gayathri is happy but she has peace. Nachiyar says to him that everyone chose their life in own. She can’t able to do anything in it.

Kathi questions Mayan why didn’t he inform anything to him? Why did this Muthuraj behaving like this? Why did he allowed Aishu to walk. Mayan says that Aishu is adamant in her words. What will he do there? Muthuraj comes there and says to them that he will leave his wife in road or somewhere else. Why did he giving lift to her instead of advising her to live with him. Mithuraj asks him to obey him. Mayan asks him to leave from here without giving tension to him. Muthuraj teases him by calling him as brother in law. Mayan loses his calm and about to beat him. Kathi stops him. Muthuraj says to them that they can’t able to do anything to him. Their key is in his hand. Muthuraj teases them as jobless person. Mayan loses his cool and kicks the pot. Mayan questions Kathi why did he shouting like this? He didn’t kill anyone instead of supporting him. Mayan teases his capability. Kathi questions him Is he looking down on him? Mayan says that he is worst. He has no special identity then roaming around with him.

Kathi is thinking about Mayan words. Gayathri comes there and questions him what’s bothering him? Kathi says to her that nothing. She asks him to share everything to her. Kathi narrates everything to him. Gayathri starts to laugh at him. Kathi questions him why did she laughing? Gayathri says to him that he may be teasing him. Kathi says to her that Mayan was serious in this time. He insulted him. He can bear his beat but not his anger. Gayathri says to him that Kathi used to give sound always but he never show any action yet. Kathi asks her to say honestly didn’t he has that ability to fight with all. Gayathri says to him why did he getting disappointed with this. He is not rowdy to do this things. Gayayhri teases him that he is a name sake rowdy not real one. Kathi says that all are looking down on him. He will prove to all that who the real he is? Muthuraj comes there to talk with Nachiyar.

Muthuraj says to Nachiyar that he was her brother son. She didn’t allow him to marry her daughter that’s why he took that decision. He apologise to her. Nachiyar asks him to leave from there. Muthuraj thinks that she is insulting him. He will shows the hell to her. Muthuraj starts to badmouth on Aishu to hurt Nachiyar. Aishu comes there. Muthuraj scolds her for coming late. She gives excuse to him. Muthuraj starts scolding her in front of her mom. Aishu stares her mom. Nachiyar bends her head down. Muthuraj Starts badmouthing Aishu upbringing. Aishu asks him what did he need? He asks her to bring his shoe. Nachiyar glares him. Muthuraj asks Aishu to clean his shoe. 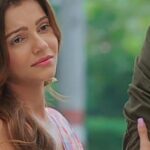