Raunak asks Yug to stay quiet. Yug tells I won’t forget today’s day,I considered you all humans but you are all stones and you broke this innocent kids courage and if Kahani did not reach on time Lucky might have died. Gunjan asks Yug why is he taking Kahani’s side? Yug tells because today she is right. He asks Saroj and Rupa why didn’t they give good to Lucky when he fainted due to hunger? Iravati tells for the first time I am seeing you question instead of respecting. Gunjan tells I will answer your question. She tells I hate Kahani and she is in this house only because of you. Saroj tells Yug listen to my answer also,you married Kahani,you brought this kids here so if anything happened to them it would be your responsibility. Rupa tells till when will these kids stay here?

Kahani tells Raunak how dare he call Lucky and Rani orphan? She tells they are my kids so till I am alive don’t dare to call them orphan. Yug tells I brought this three in this house so after today they are my responsibility. Iravati tells Yug did he change his mind about throwing Kahani out of the house? Kahani tells Iravati it is not in your hands to throw me out of the house. Kahani thanks Yug for taking her side and asks him to think about what happened today maybe he will realize that all dancers aren’t bad.

Yug tells I thought about it,now even my mind is unsettled. Kahani asks Lucky and Rani to leave the room. She tells today I saw your family and realized rich people don’t have heart,now I think you don’t have common sense. Yug tells for me you are a wheel of destruction,look at me I left my important meeting and I had to speak against my mother and everyone else. Kahani tells you are the most selfish person,you help me only to taunt me letter. She asks did I ask you to do all this? Yug asks Kahani to leave this house before everything gets destroyed. Kahani tells your problem is that you consider lie as truth. She tells you consider me a liar and Raunak and Iravati honest. She tells I don’t care what you tell me but please behave in front of Lucky and Rani because they consider you brave and good.

Yug thinks about unconscious Kahani telling him about Raunak kidnapping Lucky and Rani. He comes to Raunak’s room and tells Kahani to come on terrace. Raunak tells what will I do on terrace? Yug drags him. Dolly asks Patanga to stop crying. Patanga tells Iravati did not slap my face,she hurt my heart. He tells I have decided that I will unite Kahani and Yug.

Yug tells I have brought you on terrace to ask you whether you kidnap Lucky and Rani? Raunak tells Kahani is lying. He tells I am getting sunburnt so I am going down. Yug tells him to to tell the truth. Iravati tells that we all have to do something before Yug starts to fall for Kahani. Gunjan tells we have to question Yug without angrying him. Iravati tells not to bother Kahani anymore for now and once Yug is calm we will question him.

Yug tells Raunak that our relation is of blood so it will never break but my patience is running out so leave my sight. Yug tells God what have I done? Kahani thanks God for finally bringing out her truth in front of Yug. She tells people are correct,God is there for everyone. She prays to God to do her one last help and find her mother and father so that she can leave this house forever. 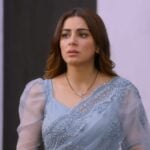