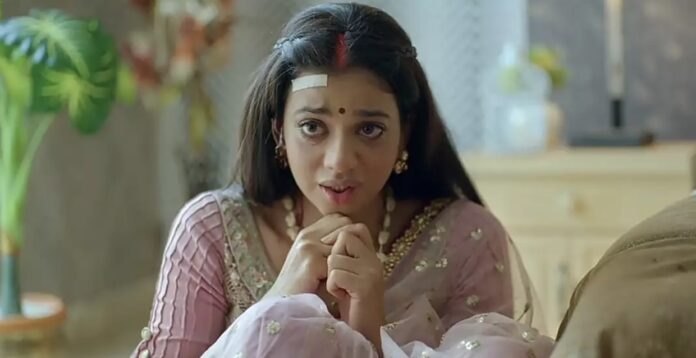 Colors TV show Namak Issk ka is on a interesting track as Iravati is using Satya to create distance between Yug and Kahani. Kahani is trying to escape from Iravati while Yug thinks Kahani is behaving strange as she is suffering from PTSD after what Raunak did to her. Satya is trying to maintain her distance from Yug but how long can she stay away?

In the last episode we saw police arresting Saroj. Yug did nothing to stop the police. Iravati told Satya she did a Hollywood standard drama today. Media came and started taunting Saroj, ladies from Mahila mukti mandal applied black color on Saroj’s face. Yug hugged her and Saroj tells him she did nothing.
Satya questioned herself if she is doing the right thing,she tells herself what she did today? Iravati tells Kahani that her message got sent but not to Yug and laughs at her. Iravati gave Kahani her phone and shows video of police arresting Saroj and tells her all this is because of her.

Yug asked Saroj if she is upset with him? Saroj gave her jwelleries to police. Yug and Raunak watched her crying. Police asked Saroj to open her mangalsutra too and Saroj thinks now she is completely alone. Iravati came to police station and shows them video of what actually happened in the the room. Saroj told she won’t complaint against Kahani because Yug will do justice for her.

Iravati told today Kahani crossed all limits and told Yug she accused your mother falsely and got her arrested. Raunak told Yug to take care of his wife now. Yug left angrily from there. Rupa asked Satya if she really wants to get mother punished and showed her the video of what happened in the room. Rupa asks her why did she lie? Satya thought if she goes to prison she will never be able to meet her mother.

In the upcoming episode Yug will promise Saroj to pay for his mistakes by bringing Kahani down at her feet.