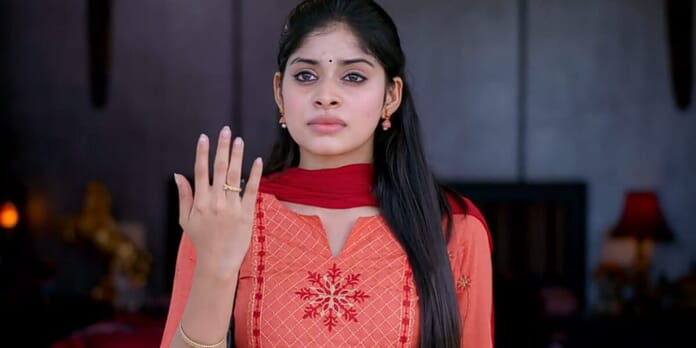 In the previous episode it was shown that Anu wondered why Surya didn’t come to the office and tried to contact him. But Surya’s phone was switched off. She sent a voice message to Surya asking why he’s trying to go away from her.

Ani shared with Ramya that Surya was avoiding to face her, so he didn’t come to the office and handed the company responsibility to Chandra. Anu decided to go to Surya’s house to meet him.

The next morning Anu got ready to meet Surya. Swamyadi suddenly came there and told Anu to follow her heart. Swamiyadi added that Anu’s wedding is nearing and she should handle everything. Pushba got confused hearing Swamiyadi’s words.

In the upcoming episode it will be seen that Chandra and Mansi will praise Anu as Devanandhi unit produced hightest profit which will irk Meera. As a reward Anu will be given permission to go out. Surya will be pratcing shouting. He will imagine Anu in front of him. Surya will tell Anu to go away as her life will be in danger if she is with him. Sharda will hear this and will try to talk to Surya, but he will refuse to talk.

Anu will come to meet Surya. She will demand an answer from Surya for going away from her. She will give him a gift and will ask to decide whether he wants to see her happy the whole life or sad. Later Sharda will confess Surya. The latter will confess his feelings fir Anu. Sharda will force Surya to promise her that no matter what, he will never leave Anu.

What will happen next? Will Surya meet Anu and explain her his act?

Keep checking this space for the latest updates of your favorite Tamil shows.